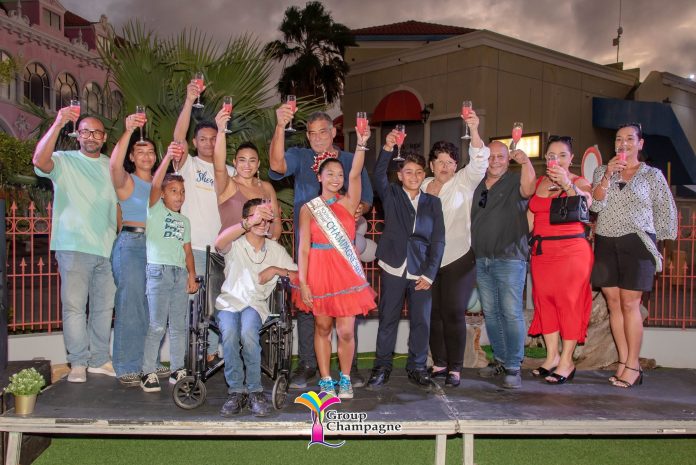 Sheqayli is not an unknown figure, seeing as in 2014 she was crowned as Children’s Queen of Aruba’s 60th Carnival.

She said back then already that she wanted to be back on stage in order to compete also for Youth Queen of Aruba’s Carnival. Her plans were postponed because of the pandemic – as Aruba did not celebrate Carnival for two years – but even so, her focus remained on preparing to participate in the Youth Queen competition.

On Friday, she went to sign up for the Youth Queen election and she was accompanied by a small parade to Patio 15, where she arrived with a brass band and guests. Seeing that it took place on Three Kings Day, three characters were chosen, who had special significance for her, to crown her. A young man who practically grew up with Shiki, who achieved his goals and showed that having physical challenges does not mean you cannot reach your goals, Disjonrick Jacobs; the talented young man, Paul Adisson Croes and her grandfather, Rodney Westerburger, whose birthday it was on that day.

Champagne Group is celebrating 25 years in Carnival and it is an honor to represent them in a Youth Queen election for this year’s Carnival.

Linchie Merryweather, head of Champagne Group, placed the sash on Shiki and then crowned her.

Shiki invites everyone to come support her this 21st of January for the Carnival Queen elections at the Renaissance Convention Center.