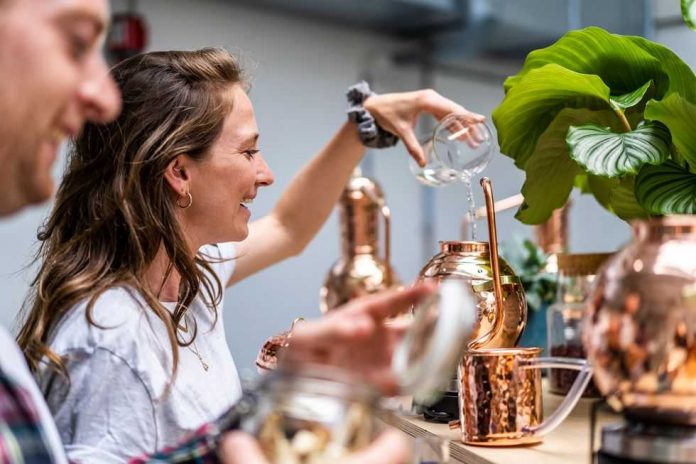 THE HAGUE, NETHERLANDS – Ruben Maduro entered the first cocktail bar four years ago with a bottle of botanical rum under his arm, and the rest is history. Today we read part 2 of this amazing Aruban adventure.

That one cocktail bar with Ruben’s rum on the counter became two, then five and then ten. “We had gold in our hands. There is such a thing as the first mover advantage. We had to act quickly before others would develop this idea.” And for Ruben, the best ideas arise in the shower. “Early in the morning I am at my sharpest. I thought about the conversation I had in London, came to the office and told my then colleague: dude, we are going to open our own distillery.”

Feelers out, looking for a property the size of a shoebox. “In the corridors I heard of a distillery that was for sale. Buyers had already registered. Then I put on the big pants. “I know you are talking to another party,” I said to the seller who wanted to get rid of the property, “but we have more money and a well-running brand.” In reality, I had no money and it all went well also not so well. I bet sky high and luckily there was no click between the company and the other potential buyer. “We think you are a relaxed guest,” I was told. “So, give us a call to our office.”

Ruben from Amsterdam who wants to take over the toko of an undisclosed international drinking giant? Easier said than done. “It was tough negotiations between me and that multinational. Ruben against a delegation of legal heavyweights, David versus Goliath. It went so far that at one point I said: this is my last offer and if you don’t accept that, it’s done. Man, I felt so lonely at the time. ”

A day later the redeeming bell came from his lawyer. The hard ball game had helped. “Your brand becomes your life. You have to give up a lot to achieve success. Like you are married to your job? No, it’s more of an affair. You are in a relationship but your thoughts are with someone else. That has had an impact on me as a person. I lost a nice girlfriend that I thought I was going to marry. That’s the other side of the coin. All your energy goes into that one thing. ”

“I see it as burning hoops that keep getting smaller. As the business becomes more stable, the hoops get bigger. But you can still do it.” Ruben is referring to the corona crisis that also hit Spirited Union mercilessly. “Ten of our ten distributors called in one afternoon. “Ruben, don’t expect anything more for 2020.” What goes through your mind then? Everything has been for nothing. It was a deep valley with sleepless nights. But I did get good advice right away. Don’t take it right away, but let it sink in for a moment and then make a rational decision. I took two weeks off, did some work at home. I really needed those two weeks.” And that “shower moment” will come again later.

The growth: “Rum is definitely the new gin”

That moment did indeed come. Spirited Union Distillery had to change course. Because while the workshops and cocktail bar were put into a long hibernation, the distillery in Amsterdam South continued unabated. Ruben and business partner Rogier managed to get the large Gall & Gall enthusiastic. “We first got ‘no’ ten times. They are of course called flat by brands. So, we decided to surprise them with a cocktail tasting. Rogier went to the office on spec on a Friday afternoon. A little later we did a nice bar take-over at a Berlin trade fair and we met representatives of Gall & Gall. With a bowl on, we asked them if they would finally come by. No sooner said than done.”

A pilot of fifty Gall & Gall’s at the beginning of last year turned out to be two hundred in November, and soon we will have three types of rums in four hundred liquor stores throughout the Netherlands. We have national coverage, bizarre!” It was a flying start to the year, says Ruben with a sense of understatement. Because where Spirited Union is rapidly gaining ground in the Netherlands, the brand is also conquering the rest of the world. A dozen European countries have already been supplied with Ruben’s rum, New Zealand has recently agreed and there are plans to add Canada, Iceland, Hungary and the ABC Islands (“a home game for me”) to that impressive list.

It is quite something for the drink that until recently had a dusty, old-fashioned image to it. We could say the same about gin about ten years ago. “That wasn’t cool either, gin was a granny’s drink.” Is rum the new gin then? “I know for sure. The great boom of gin came about because producers decided to deviate from the manuscript. That is what we do now. You always kick a pair of shins, but the people who squeak the loudest also have the most importance that everything stays the same. Bacardi of course wants us to keep drinking Bacardi. That brand has had a long time to talk to the consumer in a certain mindset. ”

This reform of the rum world has been more than successful so far. The botanical rum brands are popping up like mushrooms. Ruben doesn’t seem to have any trouble with copycats. After all, it’s about implementation, he says. “At the same fair in Berlin, we sat in the hall during a Havana Club presentation. That marketing director was actually telling our story. “Nice story,” I told him afterwards. “Do you know Spirited Union in Amsterdam?” He turned pale. It is nice when a multinational company sees the idea. Innovation comes from the little guys, not the big ones. We turned on something beautiful, Competition? Ultimately, the implementation is much more important than the idea. ”

“Sometimes amounts are put on the table to take over. You look your eyes out for a moment. It’s naive to think you can build a global brand without help – that’s what we want with Spirited Union – but I’m not going to hand over my keys. We all do this with a small team, there is no big brand behind it and we really have the wind behind us. Simply gained the trust of one of the largest retailers in the Netherlands. If that already works, what will not work?”