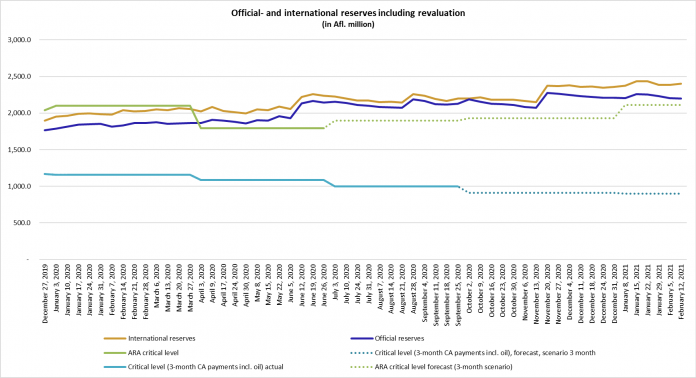 During its meeting of March 2, 2021 and after reviewing the most recent economic and monetary data, the Monetary Policy Committee (MPC)[1] of the Centrale Bank van Aruba (CBA) decided to keep the reserve requirement at 7.0 percent. The reserve requirement refers to the minimum amount of reserves that commercial banks must hold at the CBA and is equal to 7.0 percent of their liabilities with a maturity less than 2 years. The following information and analysis were considered in reaching this decision.

International reserves (including revaluation differences of gold and foreign exchange holdings), up to and including February 12, 2021, strengthened by Afl. 47.7 million compared to the end of December 2020. This expansion was primarily the result of external financing received by the government during the first month of the year and inflows related to tourism services, and other external financing. Meanwhile, official reserves decreased by Afl. 9.1 million. Consequently, the official and international reserves reached, respectively, Afl. 2,198.8 million and Afl. 2,404.3 million as of the 12th of February 2021. Accordingly, the level of reserves remained adequate when benchmarked against the current account payments and the ARA[2] metric by the IMF.

In January 2021, total credit grew by Afl. 18.0 million or 0.5 percent, when compared to the end of 2020. This was mainly driven by the category ‘business loans’, which recorded an expansion of Afl. 27.5 million (+1.8 percent), as current account loans noted an uptick. Contrarily, the components ‘other’ (Afl. –4.7 million/-0.9 percent) and ‘loans to individuals’ (Afl. -4.8 million/-0.3 percent) contributed negatively to total credit. The category ‘loans to individuals’ fell mostly as a result of contractions in consumer credit (-0.9 percent), and to a lesser extent due to housing mortgages (-0.1 percent). Remarkably, housing mortgages noted their first reduction since January 2017.

First buyers of new Commandeurs Ponton Apartments a fact: Intentional living that focuses on what you believe matters

California Lighthouse is back open for the public

Aruba is our home away from home