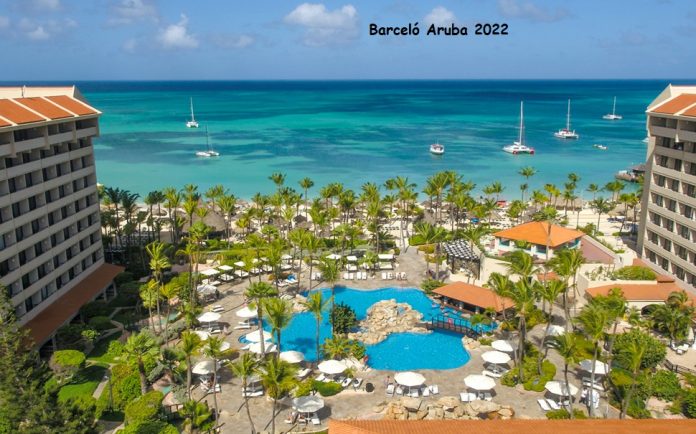 Recently on social media, debate is ongoing regarding the palapas that are slowly being removed from the beach in front of Barcelo hotel. The idea seems to be to replace these with coconut trees, something that is causing confusion and reactions both amongst our locals and our visitors.

It is known that beaches in Aruba are all public and are not the property of any hotel. For this reason, palapas on the beach are also considered public property and can be used by whoever arrives first.

There are exceptions, for example, if the property line for the hotel extends to a certain point on the beach, or if the hotel has reached an agreement with the government to privatize the use of the palapas, leaving the hotel to build the palapas itself.

Lack of clarity on this subject has led to confusion and displeasure among locals and tourists who make use of the palapas to protect themselves from the scolding sun in Aruba while they enjoy a beach day.

Seeing the reactions on social media, Barcelo Group published a statement on their official Facebook account addressing the commotion around this topic.

“It has been brought to our attention that there have been discussions going on regarding the chair saving and palapas situation following a post on social media. Barceló Aruba Management would like to clarify that the number of chairs or loungers that are around the Pool Area currently are more than what it used to be on previous years. The only thing we have tried to do is improve the appearance and make the pool area and its surrounding gardens more pleasant, as is easy to appreciate after the takeover by Barceló Group. However, to place more chairs or loungers would be going against the safety guidelines established by local authorities.

In case of an emergency there are two meeting points: one of them being the beach. So, to keep the area safe for an eventual evacuation we cannot place more furniture,” according to the statement.

“It has always been the aim of the management to keep the beach as natural as possible and to maintain the natural look of the surroundings taking into consideration the environment. Barceló Group has always respected the nature and has vowed to not only keep the grounds clean but also to do limited damage to the beach, because for us sustainability is one of our great purposes.

“The palapas have been a point of discussion for many years and to avoid this to continue it has been decided to eliminate them and to replant coconut trees in their places. Barceló Aruba is the only property of the Barceló Group that has palapas on the beach and this is against our standard. Therefore we will be taking down the palapas gradually as they deteriorate and replant coconut trees to provide the necessary shades.

We have always been clear and consistent with this policy and this sign posted on the beach from the moment the hotel became Barceló demonstrates it.”

On social media, tourists have been expressing their frustration on this subject. One person in particular pointed out that they are canceling their reservation for Aruba, because a coconut tree does not offer enough shade and protection from the heat of the sun.

Another one mentioned that as a time share owner and member of the Royal Club Barcelo, they pay a sum for maintenance that includes use of a palapa. Tourists who pay for the all-inclusive are also paying for the use of a palapa; but seeing now as they will not be able to use a palapa, they are asking what the hotel is doing to compensate for this cost.

For the palapas that are still remaining on the beach, there is a system of reservation, and the palapas get reserved very quickly. Another tourist commented: “There is a reason why people wake up at 4am to reserve a palapa. They want and need shade. The coconut trees do not give enough shade.”

However, there are others who support the hotel’s decision to remove the deteriorated palapas instead of fixing them, and replacing them with coconut trees, and they point out that coconut trees do provide enough shade and protection from the sun.

However, lack of clarity on the legality of the situation leaves unanswered questions: if the beach is public, does a hotel have the power to remove palapas and plant coconut trees?

At the University of Aruba, UAchieve