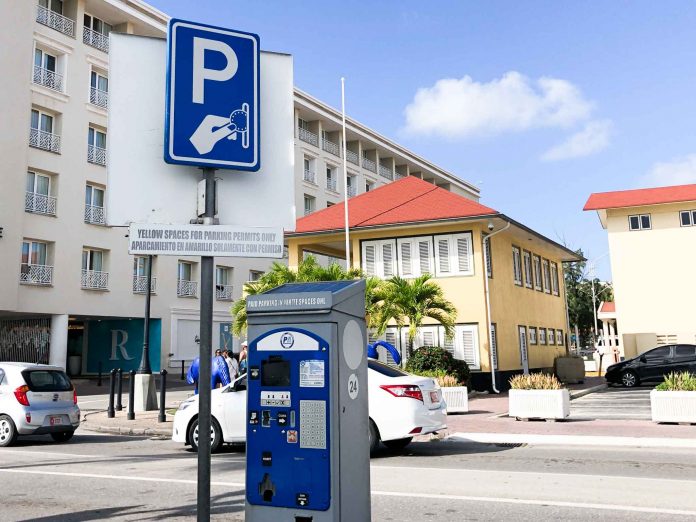 A survey on social media is receiving different reactions from the local community on the topic of Aruparking. Some people indicate that the parking system needs to be reinforced while others thing it would be better eliminated.

Aruparking exists since November 2014, and it is a company belonging to Arubus. They have 25 employees in service, divided between parking watchers and administrative personnel. Aruparking manages more than 1,300 parking spots in the entire area of Oranjestad, of which around 800 are for clients who visit the area for shopping or errands. The rest of the spots are reserved for employees working in the area, who do not necessarily need to park too close because their car stays there over eight hours a day.

In September 2015, implementation of the Landsverordering Parkeermeters (National Ordinance Parking Meters) came into force, which awarded special authority of supervision to a group of almost 25 Aruparking employees. Their work varied from controlling compliance with the parking fees, to incorrectly parked cars on the sidewalk or places forbidden indicated by a sign.

This system generated a lot of malcontent in some sectors of the community since it was originally implemented, because some people indicated that the parking system affected the economy of the city center, since customers did not have enough spots to park their cars.

Sometime later, the system stopped working. But recently discussion began about the reintroduction of Aruparking, with minister of Transport, Ursell Arends stating his intention in a press release as “bringing order and accessibility to the city center with Aruparking, from a chaotic to a regulated system.”

There are about 80,000 number plates in Aruba, of which a great portion circulates our streets. From information of Aruparking, there are about 960 white parking spots (accessible to anyone), 679 yellow spots (reserved for workers in the area) and 12 for persons with disabilities. These 1,651 spots in the city center can barely accommodate about 2 percent of all cars in Aruba.

“This reality means that parking in the center of Oranjestad cannot continue as a Wild West”, the minister said in his press release. “Through rules and order we can guarantee more and better mobility in the city center and other parts where there is commerce. In commerce there is also a conviction that a well-organized system has benefits for all. It is impossible to blame Aruparking for the situation in which Oranjestad is right now, because for the last five years that Aruparking was not active, it cannot be said that there was development in the city center.”

He added that “it is important to mention that when new members were named to the Raad van Commisarissen (Supervisory Board) of Arubus, it was ensured that a representative of the commercial sector in Oranjestad was included, in order to express the wishes of business owners in the city center. Current agreemets are that the advice of the Raad van Commisarissen will be brought to the Council of Ministers and a way to reactivate Aruparking in its totality will be deliberated.”

Minister Arends hopes that the reintroduction of Aruparking can bring order in the chaotic situation of parking in the city center and contribute to the development of Oranjestad as a whole, while stimulating our economy and making the area more accessible for everyone in the community.

Survey: Eliminate or reinforce Aruparking?
From the 11th of November, the Facebook Page Survey Aruba published a survey for the local community to give its opinion if the system of parking needs to continue in a “more effective” way, or if it needs to be definitively eliminated.

“The cars of the workers in the main street need to be in a parking lot dedicated to only them. Because when you go now, there is no place to park between 9am to 6pm. So you as a customer need to park far from the street and walk to the shops. Eliminate it, but is there a search for a solution? Arutram is supposed to be maintained my cruise tourists, who each pay before boarding a ship. This keeps the tram clean and pays the chauffeurs. We need to check with the government about that money, and that the money paid for parking helps those working in Aruparking and for the maintenance of the parking lots, because the workers of Aruparking also have a family. The biggest damage has already been done, a lot of businesses shut down because the main street was destroyed for too long, and not because of the pandemic. We are living in Aruba, now,” one user expressed.

Another commented: “Leave it, it is very good. This way you don’t find cars parked almost in the middle of the road and badly parked. People don’t respect the disability spot. Why when you go abroad you do respect it? Curaçao has it and everyone respects it. It’s not Aruparking that killed the main street, but the malls that opened all around Aruba. That’s what finished it. Besides, in the main street all clothes are the same, except Mango and La Moderna. Another thing is that the buildings are too expensive to rent out, so this killed the main street, not Aruparking.”

Yet another one proposed: “Eliminate it, but at the same time find three strategic places where you can build a parking garage of various levels, that you can charge for.”

“Open the main street back for traffic. But in the current concept, Aruparking never worked and in time became a nuisance and even has a negative image in the community”, another used expressed.

In the following days this topic will continue being debated, while it is decided if the system will stay and be reinforced in Oranjestad.

Minister of Tourism and Public Health joins queen Maxima of the...