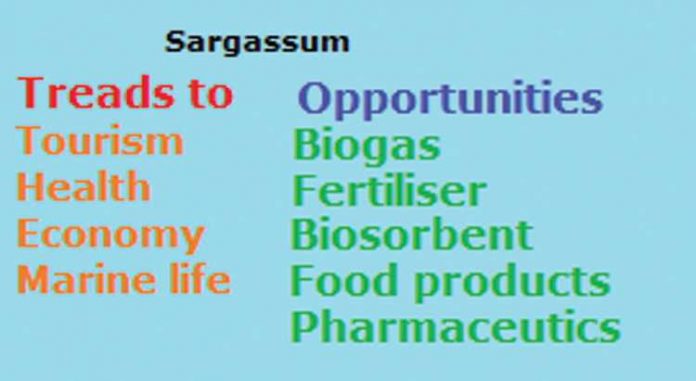 Seaweed, or macro algae, refers to thousands of species of macroscopic, multicellular, marine algae. Seaweed species such as kelps provide essential nursery habitat for fisheries and other marine species and thus protect food sources; other species, such as planktonic algae, play a vital role in capturing carbon, producing at least 50% of Earth’s oxygen.

Natural seaweed ecosystems are sometimes under threat from human activity. For example, mechanical dredging of kelp destroys the resource and dependent fisheries. Humans have a long history of cultivating seaweeds for their use. In recent years, seaweed farming has become a global agricultural practice, providing food, source material for various chemical uses, cattle feeds and fertilizers. Because of their importance in marine ecologies and for absorbing carbon dioxide, recent attention has been on cultivating seaweeds as a potential climate change mitigation strategy for bio sequestration of carbon dioxide, alongside other benefits like nutrient pollution reduction, increased habitat for coastal aquatic species, and reducing local ocean acidification. The Special Report on the Ocean and Cryosphere in a Changing Climate recommends “further research attention” as a mitigation tactic.

Sargasso a brown macro algae numerous throughout temperate and tropical oceans of the world, where they generally inhabit shallow water and coral reefs.

NASA satellites revealed the largest marine algae bloom in the world in 2018. A belt of Sargasso that contained over 22 million tons of seaweed stretched some 5,500 miles across the Atlantic to West Africa. Satellite images are showing abnormally high amounts again in 2021.Ten year data gathered has revealed the likely causes of these seaweed invasions: Global warming, dust clouds of the Saharan and the growing nitrogen footprint. Acts Just as nutrients feed red tide blooms; feeding the Sargasso, which thrives in warmer water.

Sargasso presents risks to human health as well. In the water, it’s harmless to humans, but the trouble begins once it lands on the beach and starts to decompose. Breathing in these toxic fumes may cause, skin irritation, respiratory and neurocognitive symptoms in people that come in close contact with the degrading Sargasso. Our West coast beaches also are covered with sea weed and marine grasses due to seasonal bigger waves that bumbles and loosen up the sea weed of the coral which finally lands on the coast. Public Works (DOW) usually did the cleanup work and native traditional farmers picked up the rest with which they fertilize their “cunuco”, traditional “Caquetian” agricultural land plots.

To get to know a little more regarding Aruba’s cultural origins, way of life etc. We highly recommend you to participation in this exclusive cultural encounter session, a mind opening and entertaining island experience. Whatsapp + 297 5922702 or mail etnianativa03@gmail.com our facilities and activities take place close to high rise hotels.