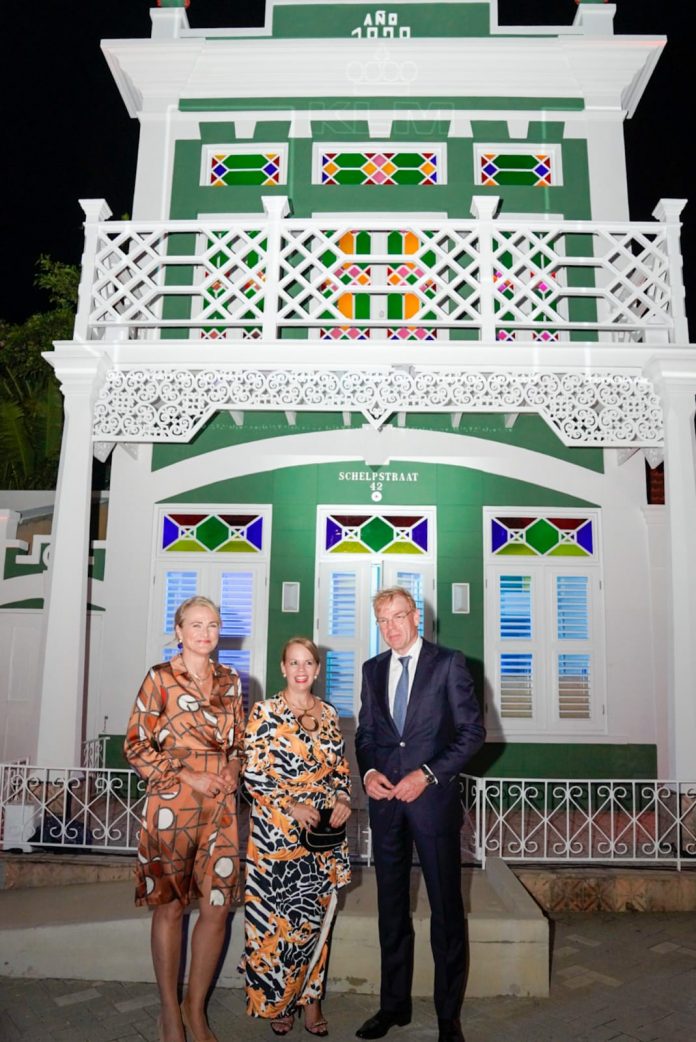 Last weekend there was a very special moment for Aruba. In the context of the celebration of 103rd anniversary of KLM, House Ecury of Aruba was selected to become a KLM huisje (KLM miniature house). This is proof of the close and fruitful relationship that exists between KLM and Aruba. Prime minister of Aruba, Evelyn Wever-Croes on this occasion congratulated Mrs. Marjan Rintel, who was appointed as the new CEO for the airline.

Each year that KLM celebrates another anniversary, it is known that they introduce a Delft Blue ‘KLM huisje’. This year, Aruban monument ‘Cas Ecury’ (House Ecury) has the privilege of being chosen to be made into a miniature Delft Blue house.

The miniature houses began being made in 1952 and are given as a gift to travelers who are members of KLM around the world. The KLM miniature houses are always replicas of houses or buildings with historical interest and special architecture. During the flights, KLM shares more than 800,000 miniature houses per years to their members and passengers who just got married or are celebrating an anniversary.

Now, the latest edition which is the home of the parents of Mr. Boy Ecury, who is our national hero from World War II, will also be shared with people around the world.

“As we continue recovering from the Covid crisis, we are proud of the numbers of the touristic global market and the European market. Numbers from the Netherlands particularly are at a higher level compared to 2019. This simply could not have been possible without the continuous support and cooperation when working with KLM. Through the partnership with KLM we built the European market together, with an annual average of 4 percent from the period 2011 until 2021”, Prime Minister Wever-Croes explained.

While it is not easy to ensure that the quality of experience that is given to the visitors remains high, Aruba remains committed to progress each day, through stimulating sustainable development for the entire island. This is a commitment shared with KLM.

Considering this, it is a great moment to recognize and at the same time be proud that a house and a family that was instrumental for Aruba’s tourism and development of aviation was chosen for the 103rd anniversary of KLM, the Prime Minister commented.

Prime Minister Wever-Croes added that as a mother and in the name of parents in Aruba, she thanks KLM for connecting parents with their children who are studying in the Netherlands. “This historical moment is important to remind us of the value of the relationship with KLM and how much KLM means to our beautiful island, and so continue reflecting on how to maintain this relationship for many more years.”

Finalizing, in the name of the government of Aruba, the Prime Minister together with the other ministers from the Wever-Croes II Cabinet congratulated the entire KLM team and wished them many years of good cooperation.

A well received and successful 18th of March celebration at Convento...