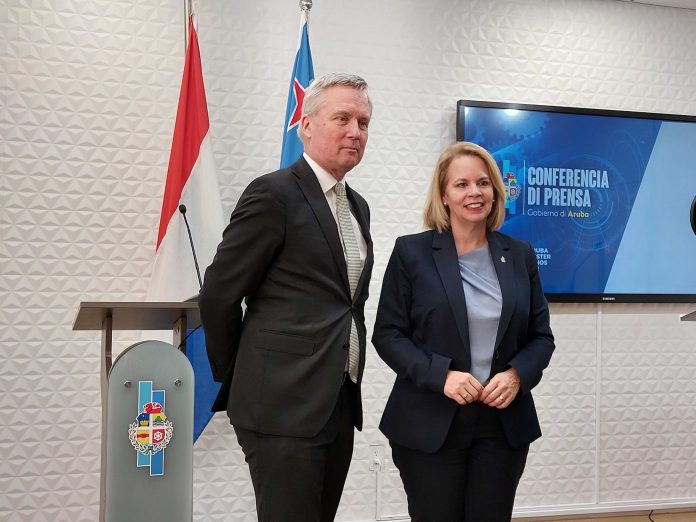 Last Monday, the government of the Netherlands apologized to Aruba and the Dutch Caribbean for the role of the Netherlands in the history of slavery. In the afternoon, prime minister of Aruba, Evelyn Wever-Croes together with Dutch Secretary of State for Justice and Security, Eric van der Burg held a press conference to elaborate and answer questions on the topic.

Wever-Croes explained in her answer to a question by the press regarding damage caused by slavery in the past and what this means in the context of restoration and monetary reparations for Aruba. She indicated that they are not so far in Aruba. She said that on the island, they want to have specially the direction that will be followed for what till come next, and currently they are thinking on three levels.

She said that the first level is symbolic. They need to decide what symbolism they think fits in Aruba for such an apology. This is a question that she emphasized she is not answering herself, rather, a commission will provide the answer.

Wever-Croes added that they have already received good news from the Dutch government, through the Secretary of State, that they are ready to take part in a memorial to Virginia Dementricia, who is known in Aruba for being a slave who became almost a hero. “This you can say is an answer to the question, but I am not sure”, Wever-Croes said.

The second level the prime minister mentioned is that they want to see improvement in education and awareness on the topic of slavery in the past. She explained that before that, they need to teach everyone in the community precisely about Aruba’s slavery past in order to have a better understanding of the apology by the Netherlands. In this context, the digitalization of the National Archive has a very important role. For this, Wever-Croes added, they received the good news that the Netherlands is ready to work together and provide more funding to continue with the digitalization of the archive. The Netherlands also indicated that they want to re-print a book by author Luc Alofs, and distribute it among the youth.

Luc Alofs (1960) is currently head teacher of Research at the University of Aruba and partner in the project Travelling Caribbean Heritage. He is also curator of the Historical Museum of Aruba, and president of the National Commission of UNESCO in Aruba. He has published various books, including “Who is Aruban? Social integration and nation forming in Aruba”; “Slaves without plantation, slavery and emancipation in Aruba”, and “Subordination and separatism; colonial governance and local politics on Aruba, 1816-1955.”

“This is all that we want to achieve in the second level regarding education and awareness. These are important and positive gestures”, Wever-Croes commented.

As a third level, she continued explaining, they want to reflect on the damage that might have been caused because of slavery in the past. She said that last week a journalist asked her how big the damage is, but she does not have an answer yet because they will now be carrying out the investigation. At this point she can say that some people or groups, neighborhoods and processes are disadvantaged because of slavery in the past.

“On top of that we need to do good research, and the question is, once this has been established, how can you update and how do you want to update the situation. Thus for Aruba, we are still on the path launched by the minister of Culture from 1st July this year until 1st July 2023. But before 1st July, we need to have a concrete plan and afterwards I will say something more concrete”, Wever-Croes added.

The question is just to meet and dialogue with more parties in society to determine the direction in which Aruba needs to go.

She added that she cannot put a price on damages.

“For us, today is very meaningful that this step was taken by the government of the Netherlands, and from this moment already we will be working on recovery, restoration and reconciliation,” she emphasized.

Secretary of State, Eric van der Burg explained also that if we look at slavery in the past in the Dutch Caribbean, the countries that back then were not yet countries and Suriname, we can see great differences between the islands and Surinam. And to stay close to home, regarding slavery, there is a big difference between Curaçao and Aruba.

Van der Burg also mentioned that in his speech, Prime Minister Rutte talked a lot about Suriname. He explained that on the one hand this has to do with awareness that still needs to be achieved in the Netherlands regarding the differences, between for example Curaçao and Suriname on the one hand, and Aruba and Bonaire on the other.

“If we see the situation in Aruba this was not comparable to what took place in Curaçao and Suriname. As I commented during the meeting this afternoon, if you are a slave, then for you it doesn’t make a difference if you are one of 500 or one of 50,000 people, you have been enslaved”, Van der Burg indicated.

He commented that for the Netherlands it was very important to address all seven countries at the same time in order to make it clear that even though there are historical differences, there will be no differences in the futuro, and for individuals it will not make a difference.

“As your prime minister said, [Monday] morning we mentioned three cases that we are taking into consideration, but I mentioned also that aside from that we will allocate funds that will not be available only in European Netherlands. The money is also directed to Suriname and countries within the Kingdom and the special congregation in the Kingdom”, he pointed out.

The Tree of Giving at Hilton Aruba Caribbean Resort & Casino