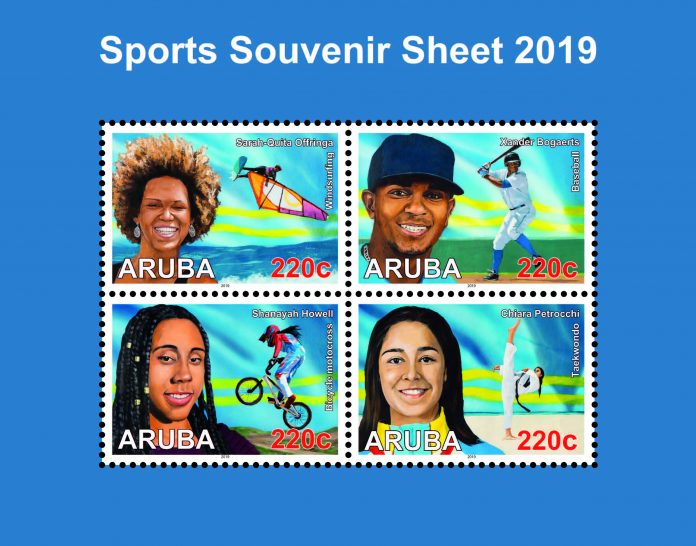 Post Aruba N.V. emitted a new set of stamps called “Sport Stamps 2019”. This set consists of four (4) stamps valued at 220c each for a total amount of Afl.8,80. The accompanied Souvenir Sheet will be sold for the price of Afl. 8,80. The first-day-envelope costs Afl. 10,55. The stamps are designed by Mr. Armando Goedgedrag. They are printed by the Johan Enschedé Security Print.

Post Aruba is honoring four out of the many Talented Local Athletes. These Athletes are dedicated and passionate about the Sport they Master, and Aruba is proud with their achievement. This should be a motivation for other youngsters, setting goals and even surpassing their expectations. As parents, we know all the benefits that sports can have on our children’s physical, emotional, and social development. We want to encourage our children to play Sports for as long as they can. Here follows some points: Make it fun for them; Do not coach; Setting healthy expectations; Continue cheering them on and teach them how to handle failure. Participating in Sports keeps children physically fit. Another important benefit of Sport is that children learn important virtues of life. Much more can be said but here follows our short summary on the achievements from our four Talented Local Athletes.

220 cents: Windsurfing
Sarah-Quita Najive Offringa is a professional windsurfer of Aruba. While doing her best to achieve both her “VWO-diploma” in Aruba and afterwards her Bachelor Degree Laws in The Netherlands, she managed to participate successfully in different international windsurf championships around the world, and now she is the youngest athlete who has won 15 World titles in her career around the world. Her specialties are slalom and freestyle, but during different wave competitions she ended many times in the top three. She has been consistently nominated for many Awards like the ISAF World Sailor of the Year Awards.

For her performances she was knighted in 2013 as “Ridder in de Orde van Oranje Nassau”.

220 cents: Baseball
Xander Jan Bogaerts is an Aruban professional baseball player for the Boston Red Sox of Major League Baseball and the Netherlands national baseball team. Besides a lot of individual Awards, as member of the Aruban youth selection he has won the Latin American Championship, the Junior League World Series and Senior League World Series Championship, but the biggest successes are his two titles of the MLB World Series in 2013 and 2018. He is one of the league’s top shortstops.

He won the Silver Slugger Award in 2015 and 2016 for being the best offensive player at his position in the American League.

Xander: “I have learnt the importance of teamwork and believing in one’s self and striving to give my best all the time, even under pressure. Given my experience I enjoy sharing my knowledge and helping others realise their potential.”

220 cents: Bicycle Motocross
At the age of five this talented young girl named Shanayah Shaljenshka Howell showed that she was by far the best BMX-cyclist in Aruba. After winning all there was to win during the BMX-competitions in Aruba, she was ready to conquer the world.

In the year 2006 she brought the very first world title to Aruba, by winning the UCI BMX World Championship in Brazil. Shanayah repeated this nice performance becoming BMX world champion in Canada in 2017. In 2018 she won gold in Costa Rica, riding in the Pro Elite Class. More than once she has received recognition awards nationally as well internationally.

In 2008 she was awarded the “Lieutenant-Governor Felipe Tromp Award”.

In the Caribbean and Latin and North America she has won bronze, silver and gold at International competitions, such as Pan-American Open in Costa Rica, Canada, Mexico, Las Vegas (U.S.A.). In 2018 she ended in Tunisia on the fifth place during the World Championship.

These stamps are be available at all the Post Office locations, namely in Oranjestad, San Nicolas and Sta. Cruz. Make sure that you have this set in your collection as the stock is limited.