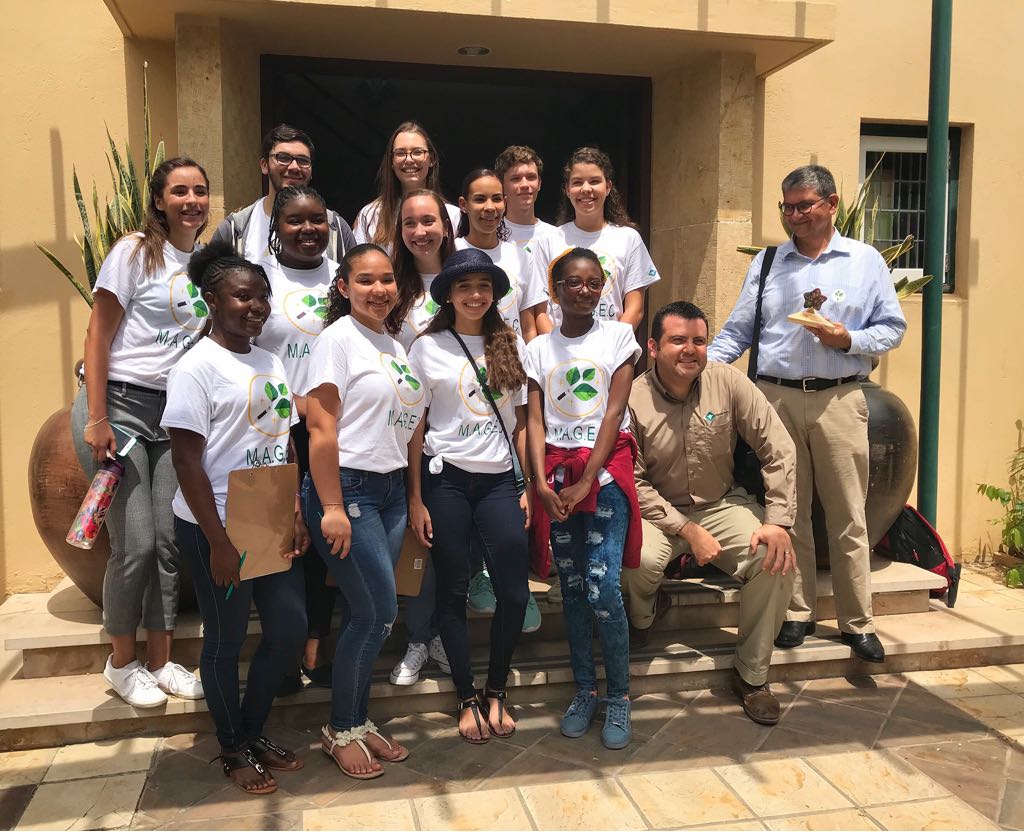 ORANJESTAD, APRIL 25.
It was at the University of Aruba in the Academic Foundation Year program that a couple of students were inspired by the course: Introduction to Earth and Environment, to make a change. This class made the students more aware about the damage that is being done to our planet and how immense these problem are world wide. With these concerns in mind, a new non-profit student organization called M.A.G.E.C. was formed. M.A.G.E.C. stands for Making Aruba a Greener Environment Club.

The organization strives for a more sustainable Aruba by organizing events and working on new ideas to raise awareness and to come up with innovative solutions for certain environmental issues.

M.A.G.E.C. is a club consisting of 13 dedicated members who share the same vision and within in five months we have accomplished great things that have made a difference for the
environment and community of Aruba.

● We have organized a successful coastal cleanup at Dunes beach, where we collected
over 200 kilograms of waste.

● We volunteered for Plastic Beach Party during the carnival period asking the public to
participate in recycling their plastic used during the parades. Approximately 70 kavels
participated in this project.

● We helped AHATA with their campamento project 2018 that brought awareness to the
campers to keep their campsite clean. The members of M.A.G.E.C. helped by asking the
campers for their participation in this project and we also got the opportunity to be a part
of the examiners for the competition.

● We were granted the opportunity to have a M.A.G.E.C. representative on the AHATA’s
Environmental Committee

● We volunteered for Aruba Doet in collaboration with the University of Aruba, were we
had created an edible garden for St. Dominicus College Elementary school.

Our biggest project to date has been our recycling project at the University of Aruba.
While working with Plastic Beach Party we were introduced to the process of recycling plastic.
Because of this M.A.G.E.C. thought of the idea to implement plastic recycling bins on the
campus of the University of Aruba. The idea was to create bins composed 100% of recycled
plastic with the help of the equipment at Plastic Beach Party. After creating several samples, we created our final official design that consisted of:

Each bin took approximately 48 hours to produce. Each plate was made from an estimated 40 plastic bottles. Therefore, each bin with 8 plates was made with 320 plastic bottles. The border for each plate was made with approximately 26 bottle caps. Therefore, for the whole bin that would be 208 bottle caps. This was excluding the top, bottom and extra fillings to stick the borders together.

There are five bins that will be placed around the university campus. Three bins are of the
official design and two are temporary bins that were made differently with HDPE plastic. The
plan is to engage University students in our project by getting them to recycle their plastic. From this collected plastic we plan to replace the temporary bins with official ones.

We are grateful to Plastic Beach Party for helping us on our journey and always keeping their
door open to us. We would also like to thank the University of Aruba. When we approached the university of Aruba with our proposal, they were very excited and offered to always help us whichever way possible. We are appreciative of Ms. Charisse Hoen has helped us with planning the launch day and guided us in the process of marketing. We would also like to give a special thanks to Mr. Giovanni Lew Jen Tai who has recently been appointed as one of M.A.G.E.C.’s advisors, and who has always gone the extra mile for us.

We hope that this project will be a success. Our goal is to demonstrate to other schools and
organizations that they can recycle and make something beautiful. However, our grand goal is to inspire as many people as possible to implement it in their lifestyle. If you believe it you will achieve it.

If you would like more information about M.A.G.E.C., please email Lian van den Berg, Vice
President of M.A.G.E.C. at magecaruba@gmail.com

A taste of Hilton Aruba