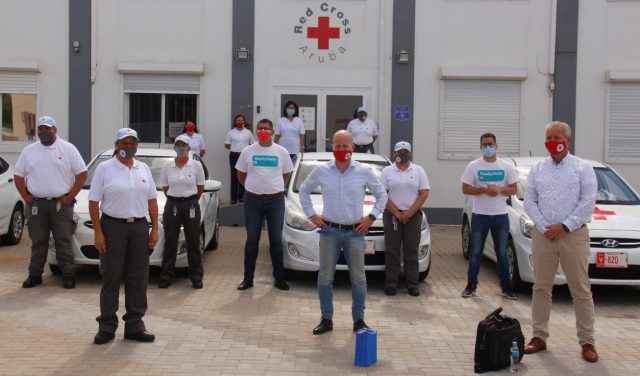 ORANJESTAD — At the moment a quarter of the Aruban population depends on food aid. But from this summer onwards, the island itself should be able again to help this group and other people who rely on, for example, the Emergency Social Assistance Fund (FASE) due to the corona crisis.

This is what State Secretary Raymond Knops says during his working visit to Aruba, where he also visited the Red Cross. “These are gigantic numbers that have been dependent on food aid for a long time.” It has not yet been decided whether the Netherlands will again give money for emergency aid. “Those decisions will be made shortly, so I cannot anticipate that. At the same time, I also add, and that has now also been my signal to the Aruban government: we will be a year later soon, are we still talking about emergency aid or is this a situation that had to be dealt with by the country itself? ”

The Red Cross reports that during the corona crisis it distributed 75,000 hot meals in Aruba and 8,000 e-vouchers with which 20,000 people could shop. They have also supported more than 100 doctor visits to patients. Other aid organizations also provide thousands of people with meals and food every week.

Many of the families in need of help do not have legal status. Aid organizations already estimated in April last year that this number is about 20 thousand. The undocumented are not entitled to assistance from the government so they should seek help from the aid organizations, said the Aruban prime minister last year. However, the Red Cross does not receive any money from the local government for this support. The millions they received last year were donated by the Dutch government.

Knops again emphasizes that agreements have been made with Aruba stating the island will handle everything itself from the summer onwards. “Everything that has to do with welfare, social assistance, special assistance, food aid will no longer be a Kingdom task, nor is it the task of an emergency relief organization such as the Red Cross. At least not in the size as they do now. It is important that the country of Aruba takes care of everything that concerns assistance to their people in the coming period. ”

With regards to the undocumented migrants who need help, the Dutch administrator thinks that Aruba should act upon. “I think this is a problem that has now clearly surfaced and the country of Aruba cannot ignore it. You cannot use the undocumented in the economy at times when the need is high and when a crisis occurs point out to these people as the first to take the blow and say: now we do not need you anymore. ”

The land packages which are agreed with the Dutch for Aruba, Curaçao and St. Maarten also contain measures to tackle illegal work and also to prevent foreign workers from working illegally on the islands. But Knops says there must also be a safety net for people who have absolutely nothing. “A lot has to be done in this area in the coming months.”