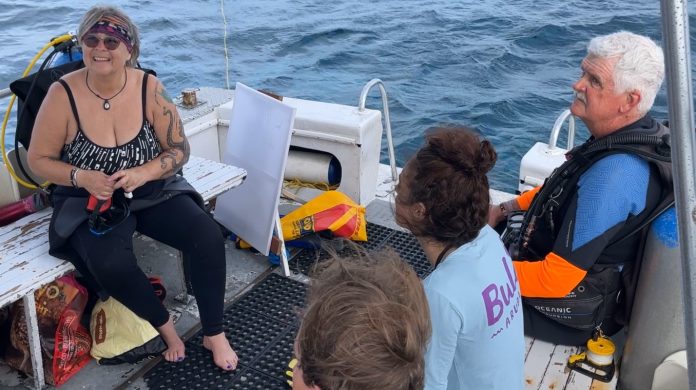 Soon Aruba will be part of a pilot project from a foundation that not only creates a new experience, but also has as its main goal to bring awareness to our people regarding the protection of our environment and marine life.

The important figure in this project is painter Marion Gerard from Canada.
Marion H. Gerard is one of 5 sub-aquatic painters in the world. A genre and discipline created by Andre Laban in 1968, an engineer famous for his collaboration with the famous personality Jacques Cousteau.

The act is a careful and responsible process because it involves paintings done under water, at varying depths and temperatures, but also different types of colors in each dept – the deeper you go, the more the colors change underwater because of the reflection and lack of light. This without taking into consideration that some days the water is calm and some days it is clouded. More information on this project will be known in the future.

Artist Marion holds the record for the painting made at the deepest point possible, which received recognition by the Guiness World Book of Records (# 15091722461tdup) in 2016, and the temperature down there was 3 degrees Celsius. All this was done with the goal of educating and creating awareness regarding nature, caring for our environment and appreciation for all that our marine life has to offer.

During the pandemic, the French-Canadian painter suffered an accident which left her bedbound for two years, and last December she began walking again after being declared handicapped by her doctors. During her vacation in Aruba her rehabilitation began and not only she began diving again with the help of the professionals at Pure Diving Aruba, but it was here she also began painting again after her accident. This was the beginning of a new era with new goals and new records.

Her life mission which began nine years ago was brought to life again. But everyone who is interested can meet Marion, to chat, dialogue, exchange ideas and experiences regarding the possibilities for a better future for our children.

Marion will have her first three works painted in Aruba during an exhibition at Aruba Art Fair which will take place next weekend. As soon as that is done, from Tuesday on she will begin with the first of six diving sessions for the month of November. All this in connection with the launch of Red Cactus Foundation Aruba.

This will conclude with an exposition of all her works, their story, goals and other collaboration with pillars of care of our beautiful island.