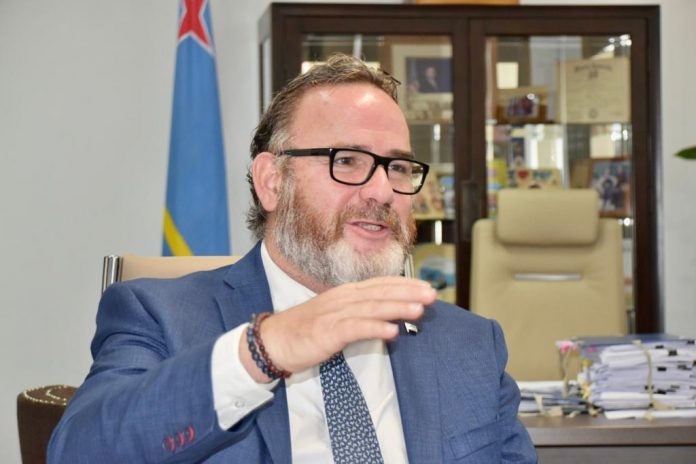 During a press conference this week by the minister of Labor, Energy and Integration, Mr. Glenbert Croes, he informed about his recent trip to Ecuador, where he held varios meetings with the minister of Energy and Mining, Dr. Fernando Santos Alvite, vice-minister of Hydrocarbons, Ruben Dario Espin Zapata, and executives of PetroEcuador.

Croes explained that last year he was in Ecuador to meet with the minister in charge of Energy at the time with the intention to search for possibilities that could result in a reduction of the price of water and electricity for Aruba. Considering that the goal of the government of Aruba is to lower the price of electricity, this means that minister Croes did his utmost effort and he feels that there is an opportunity to reach agreements that can benefit the Aruban people.

Seeing as national petroleum company of Ecuador, PetroEcuador has been supplying HFO to Aruba for a few years already, through some intermediaries, it was advised to search for possibilities to eliminate the intermediaries. Doing this, Aruba can through the Refinery of Aruba (RdA) and Fuels Marketing & Supply Aruba (FMSA) purchase HFO directly from PetroEcuador.

Once it is no longer necessary to pay commission to intermediaries, FMSA can obtain HFO with a discount compared to the price it is currently paying. Consequently, utilities company WEB till also receive a discount which can be translated to the community through the reduction of the price for electricity and water, according to the minister.

According to a press release, the government is aware of the concerns within the community regarding the cost of life being very high. For this reason, efforts continue that could lead to a reduction in price for water and electricity, which are fundamental to reducing the cost of life for the entire community.

It is for this reason that Croes together executives from RdA and the government’s adviser on this matter travelled to Ecuador to meet with the new minister of Energy, Fernando Santos Alvite and vice-minister Espin Zapata. They were accompanied by General Consul of the Netherlands in Ecuador, Diego Almeida

Guzman. Croes thanked the Dutch embassy for the support received because for Aruba, the diplomatic platform of the Dutch embassy is instrumental to open doors and show the seriousness of intentions of the Government of Aruba for every country that they are approaching, in this case Ecuador.

During the meeting, the willingness of the government, Ecuadorian ministers and PetroEcuador to cooperate with Aruba’s request to reach a direct relationship between the national companies was expressed, in this case, for RdA and FMSA to purchase the fuel that WEB needs directly from PetroEcuadro without intermediaries.

Additionally, Croes said that because RdA and FMSA are 100% property of Aruba, he urges PetroEcuador to not let our companies take part in a tender like any other private company, but rather to allow negotiations to take place directly finding fair and balanced terms with a win-win for Ecuador and Aruba. Concluding, the minister emphasized that the meetings went well and Aruba was well-received by Ecuador.

PLASTIC RECYCLING PROJECT AT THE UNIVERSITY OF ARUBA