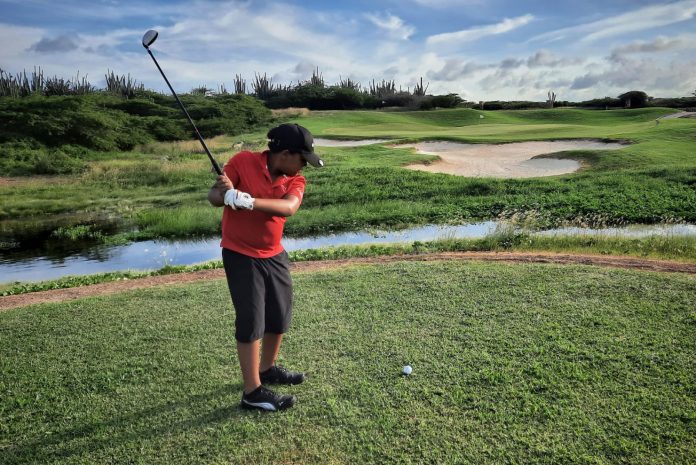 “My dad encouraged me and I found the sport fun.” Those are the first words that Ayrton Schenker said during a special interview with our reporter in which he was asked to speak about what he loves the most, golf and soccer.

During his first interview with the press, Ayrton showed he is a nice third grader at Mon Plaisir School, who began finding his passion for sport from a very young age.

His father, Neomar told us that four to five years ago, he was living in a hotel in Curaçao where he was on a special assignment. There he was taking golf lessons recreationally, and when Ayrton would come stay with him they would play golf together. This is how golf became Ayrton’s favorite sport. “There we began realizing that he has love for the sport, and he began showing interest since he was three years old”, Neomar mentioned.

He also said that he signed Ayrton up for baseball as well, but there he realized that his son didn’t have the same connection, and decided to sign him back up for golf. Neomar says that he was happy. “Actually when I was in Curaçao I was living by myself, and as a distraction I began with golf. When Ayrton would come stay with me we would go in nature, and that’s where the connection came from and he picked that up. Now I dare say that he plays better golf than me”, he said.

Ayrton’s father points out that golf has importance for a person during their whole life, “where you challenge yourself and have discipline.” This is why when Ayrton showed interest in playing golf, his father began dedicating all his time to it, so that his son would grow in this sport.

Currently Ayrton is training in Tierra del Sol with coach James Kiley (golf professional instructor at Tierra del Sol) in order to achieve his dream of going to the United States with US Kids Golf Foundation. Ayrton says his idol is Tiger Woods.

US Kids Golf was created in the year 2000 and is dedicated to making golf easier to learn so that it can be enjoyed by children. They recognize the need of implementing training programs for youth competitions. They also organize more than 1,600 events throughout the year, thus becoming the biggest organizers of golf tournaments in the world.

This organization makes sure that children between the ages of 4 and 12 years old can receive the opportunity in different states where competitions are being held. “But before you can reach US Kids Golf you need to go through certain qualification, before you can get there”, Neomar said.

They began making contact with the organization in order for Ayrton to reach this goal. Neomar says that they want to go to Medellin, Colombia so that Ayrton can play and qualify in six rounds, increasing his score so that he can go to the United States “so they can see how Ayrton is doing and he can obtain his official handicap.”

In golf terms, handicap is an average of hits per tournament that each player has. This is also depending on the terrain on which was played.

Aruba doesn’t have its own approved organization or federation like US Kids in the United States. “You cannot qualify in Aruba and see how your score is in order to reach US Kids. Golf is a game heavily based on gentleman and must have people to witness if the child is really that good. This is why you need to have a qualification to certify the child’s level”, Neomar assured us.

But Ayrton’s dream is split, because he also enjoys playing soccer and wants to play this sport professionally. Aside from beign as good as his idol Tiger Woods, he wants to be as good as Dylan Ross, a local player, in order to travel around the world doing what he loves the most – playing soccer or golf accompanied by his father, who is also his number one supporter, always standing behind him.

All this without leaving school aside. Ayrton’s favorite subject is math, which he uses a lot and applies for golf.

To finalize, Neomar’s message to other parents is this: “Let children go in that which they enjoy.” Ayrton finished his interview saying “never give up and always go after your dreams.”

Aruba to me; Sabeela Orbay and Metin Orbay