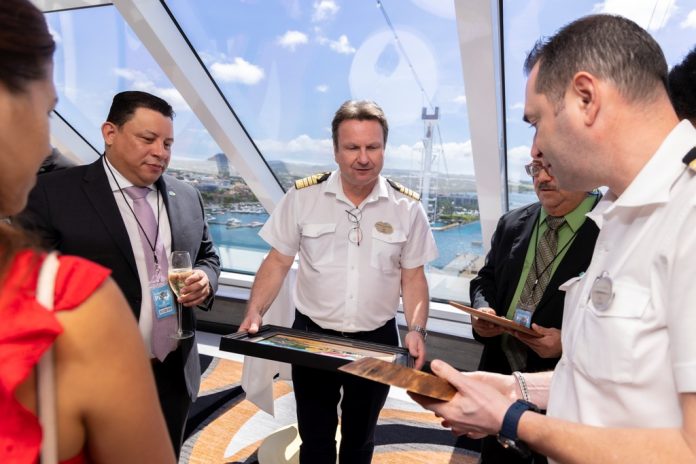 Last Saturday was a day where the whole of Aruba could be proud to welcome Norwegian Prima, one of the newest cruise ships in the market. CEO of Aruba Ports Authority NV, Marc Figaroa boarded the boat to personally welcome captain Gustavsen, his crew and the more than 2,100 passengers to Aruba.

A short ceremony took place on board, during which an exchange of the usual plaques took place between Aruba Ports Authority NV, Aruba Tourism Authority, the ship agency and the captain of the Norwegian Prima.

“It was last August when Norwegian Prima began sailing and was baptized in Iceland recently to begin its travel through the Atlantic, arrive in New York and from there begin its 12 day itinerary, of which Aruba forms part. Today, finally we have it visiting. It is a great day for Aruba, for the port and for APA”, Marc Figaroa said with a smile of satisfaction on his face.

Figaroa highlighted that the arrival of the Norwegian Prima is an added value for our economy and for our tourism. It is a positive development that can be seen with great satisfaction. APA together with its partners put a lot of time and effort to welcome this cruise ship to our port. The demand for Aruba remains big and Norwegian Cruise Lines is well aware of this too.

The director of APA is proud to announce that Norwegian Prima will return once more in November, after which it will continue with the rest of its itinerary. This itinerary can be considered an introduction to the market, and will continue in the following months.

Norwegian Cruise Lines is an important partner for Aruba. It arrives to our island with different ships. Aside from Norwegian Prima having another call in November, another ship from Norwegian will be coming this season to Aruba. In December we will receive another “first call” from Norwegian, the Norwegian Encore. Norwegian is the third cruise line bringing the most visitors to our island. APA is working hard to attract these cruise ships through the whole year, meaning also in the summer.

Norwegian Cruise Lines has different calls with different ships in the upcoming weeks. Figaroa expects a strong winter season with this partner.

The Norwegian Prima carries a maximun of 3215 passengers. The cruise ship has 20 floors, 1646 rooms, 16 lifts and measures 299 meters in length. It is called the Prima Class of Norwegian Cruise Line and it is the first of six cruise ships that were ordered in Italy in 2017, the first to be completed and began sailing last August.

Norwegian Cruise Line, also known as Norwegian, is an American cruise line founded in 1966 in Norway, incorporated in Bermuda and with main headquarters in Miami. It is the third biggest cruise line in the world in amount of passengers, controlling around 8.7 percent of the world market for the cruise industry in 2018. It has an annual income of 6.06 billion dollar, and its owner is Norwegian Cruise Line Holdings. In total it counts with a fleet of 18 cruise ships and five more in construction.