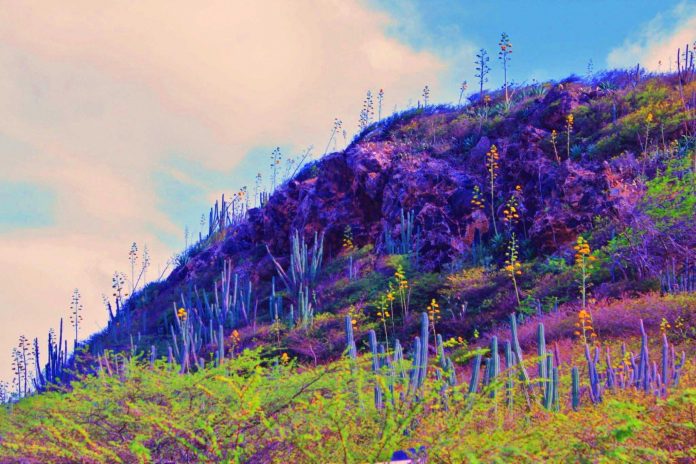 It is generally accepted that in the beginning of the Paleo-Lithic era, occupation of the American continent started with archaic hunting and scavenging who followed big mammals like the mammots in to North America. One possible route of various that these nomads could have followed to reach the Caribbean was from the Floridian pan handle jumping island to island till reaching the southern continent or jumping from the Yucatan peninsula to Cuba and navigating along the Central American Caribbean coast reaching the island. So the most probable maritime route of accessing Aruba must have been from out of the isthmus of Paraguaná reaching out of the South American continent. This would have been the shortest and easiest way to reach our happy island.

There is no doubt that the distance in the past must have been closer to what today is Venezuela, sea levels where 60 to 90 meters lower, the further you get in time. The land that today forms an isthmus to the outer side, a land stretch from the coast till the foot hills of the Sta. Anna in South America, so it is a fact that the island is attached to the South American land mass, positioned on or part of the continental shelf. Many animals could have cross over just as the archaic forefathers have done during thousands of years of acculturation with in an archaic context of existence during thousands of years. They could have reached this part of the world maybe just by walking.

We thinking about twelve thousand years ago we must imagine that the temperature of our planet earth was six to twelve degrees cooler than it is today in the southwestern Caribbean area, while the Aruba`s landscape was also covered with a greater amount of flora then in present time. So, the overall conditions in which these ancient marauders found this land upon their arrival was in every aspect much more favorable than today. This contributed to an easy and a sustainable way of life in a harsh and wild environment. The island`s landscape and Topography in many areas offered perfect layouts that formed zones where people were able to walk for hours under a green canopy of a semi rain forest, where trees blocked the incoming sun light during the whole year. Forest consisting of mixed vegetation made out of various types of trees, ferns, orchids, vines and bromeliads etc. Many of these plants have long disappeared and are to be considered extinct and lost to science forever. Who knows what medicinal properties, food source, color pigment or even an effective insect or vermin repellent these plants could have carried just to keep it simple. Even though it is a small Island, there were also places that were open grasslands or savannas covered with cactus and xerophilous, while other zones where made out of wet lands and maybe natural salt pans. However there were no mango trees or coconut palms, tamarind juice or watermelons and everything they knew about electricity was that it was the father of fire, wind and water and that the earth was their mother and mother of all things. He, who came from beyond the clouds and lit up the night sky with its flash and thundering voice.

To get to know more regarding Aruba’s and its origins, its animals culture etc. We highly recommend you to book your participation. Living our cultural encounter session is mind opening and entertaining curious hearts for decades. Mail us at etnianativa03@gmail.com. Our facilities and activities take place close to your place.