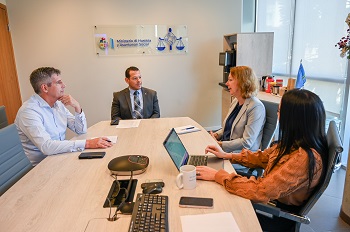 The Minister of Justice and Social Affairs, Mr. Rocco Tjon, recently met with Mrs. Monique Moss, a member of the implementation preparation team for the new Dutch Code of Criminal Procedure.

The Netherlands allocated 450 million florins to implement this Code of Criminal Procedure.

During the Judicial Four Party Consultation (JVO), which took place in August of this year, Minister Tjon stated that Aruba will implement the new Code of Criminal Procedure in 2024, which makes Aruba the first partner in the Dutch Kingdom to adopt this Code.

Mrs. Mos said she was willing to provide support to Aruba in the process of implementing the new Code of Criminal Procedure. Mrs. Mos will hold several meetings with stakeholders, such as the Common Court of Justice, the Public Prosecutor, the Police Department, and the Ministry of Justice and Social Affairs.

This new law contains lots of changes that will have a significant impact on practice.

Some changes include new investigation methods, changes in the rights of the detainees, victims, and legal representation. There will also be changes in custody and detention.

The goal of this meeting was to draw up a plan to initiate the implementation process where they will seek the needs in IT and required courses to have this included in the budget for 2024.

In the upcoming year, all police officers, the Public Prosecutor’s Office, the Joint Court of Justice, and all relevant departments will undergo training in the new Code of Criminal Procedure.