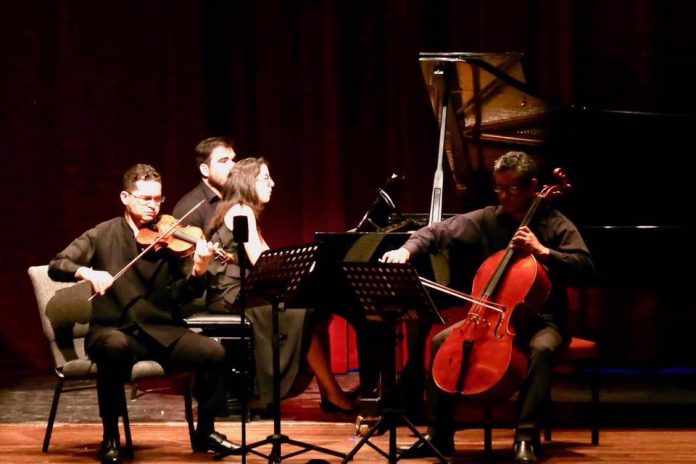 The Aruba Symphony Festival and Academy is an international event where every year, first-class musicians from around the globe make Aruba their destination. During these 12 intensive days of music-making, guest artists and students from more than 15 countries give the happy island an unforgettable experience with full-house concerts, workshops, conferences and classes led by celebrated international artists. Most of these concerts are FREE, some have a small admission and NEW is that the festival offers VIP packages this year. This is an event you don’t want to miss. Aruba Today will have more on this program and the participants in future editions.

The fifth edition of the Aruba Symphony Festival will inaugurate on July 17 at Cas di Cultura with the participation of the women’s choir Den Harmonia and the Santa Ana School (Noord) children’s choir under the direction of the Aruban Opera soprano Tica Giel and accompanied by the legendary Aruban pianist Johnny Scharbaay. Their program consists mostly of traditional Aruban songs. Tica also will sing some numbers. After the performance of the singers, the world renowned Venezuelan pianist Edith Peña will play Variations on the theme “Ah, vous dirai-je, maman!” C Major. KV 265 W. A. Mozart; following this, Randolph Kelly, the principal violist of the Pittsburgh Symphony Orchestra will join Edit to play “Arpeggione” Sonata D. 821 – F. Schubert, and to end the evening’s program, Edith will combine with Adam Liu to play J. Brahms’ Cello Sonata No. 1 Op. 38. Adam Liu has been Professor of music at Duquesne University for over 11 years. He is the assistant principal cellist of the Pittsburgh Symphony Orchestra.

During the following 10 days after July 17th, Aruba will be in the grip of concerts by over 100 world-renowned musicians and conservatory-level music students. As part of the Academic program, the Festival will also feature the internationally well-known Dr. Benjamin Zander who will give his world acclaimed lecture, “The Art of Possibilities.”

Responding to requests from fans of the Symphony Festival, the Board of Directors has introduced the VIP Access ticket. The VIP Access ticket costs Afls 200.00. It is valid for all concerts and other events staged by the Aruba Symphony Festival. It is the ticket of admission at the concerts where admission is charged, it guarantees seating in the reserved VIP seating section at all venues, whether it is at Cas di Cultura, Ritz-Carlton, Casibari Café, Paseo Herencia or on board the Freewinds, and it is the invitation to the cocktail at Cas di Cultura following the opening concert where the guests can mingle with the musicians.

The Story behind the Festival

Simon Gollo is founder and President of the Aruban not-for-profit Nuevo Mundo Foundation that organizes and produces the Aruba Symphony Festival and Academy, of which he is also the Artistic Director, its heart and soul. Gollo has given some 30 concerts in tens of countries all over the world during the last twelve months. Next month he will go on a three nations’ tour, Czech Republic, Germany and Austria, as a member of Q-arte String Quartet of Bogotá, Colombia. Later this year he will be directing orchestras at several concerts in Brazil, and Simon has also been invited to direct orchestras in Vietnam in 2020.

The Aruba Symphony Festival tries to involve Arubans in its activities. Last year the Festival featured the two best known Aruban songs, “Aruba Dushi Tera,“ “Abo So” and other songs by wellknown Aruban composers, and sung by the two best known choirs of Aruba: “Ars Nova” and “Cantare” directed by Mayra Kock – Garrido, accompanied by icons of the Aruban musical scene, Edwin Kock, Ryan Maduro among others. In past years the Festival gave scholarships to an Aruban pianist and a trombone player, and has advertised that more scholarships are available this year.

Culture and Education, together with the Family, form the backbone of the Aruban society.

The Aruban government has embraced the concept of the LeerOrkest that education without music is not education, and it is now striving to bring music back into the curriculum of the basic schools. According to the philosopher/educator Emil Friedman, culture without music is not culture. The Aruba Symphony Festival is Aruba’s strongest expression of our musical culture and we are indebted to Gollo for his decision to stage the Festival here. Because the musicians come from so many parts of the world, the Aruba Symphony Festival, like the festivals of Tanglewood and Aspen, has also become a strong platform for publicity of Aruba as a tourist destination. q

VIP Access tickets are obtainable at all bookstores, at the four stores of Aruba Vision Center, at Cas di Cultura and at the board members of the Aruba Symphony Festival: Alberto Perret-Gentil (aperret@perretingenieros.com), Johnny Croes (johnnycroes62@gmail.com), Clyde Harms (clydeharms@yahoo.com) y Orietta Mansur (oriettamansur@gmail.com). VIP Access tickets make wonderful gifts for family and friends, personal or commercial. For more about the program and the performers at the Aruba Symphony Festival 2019, visit www.arubasymphonyfestival.com.

The Casino at the Ritz-Carlton, Aruba to reopen as Aruba’s premier...

Make your next snorkeling trip amazing with these tips