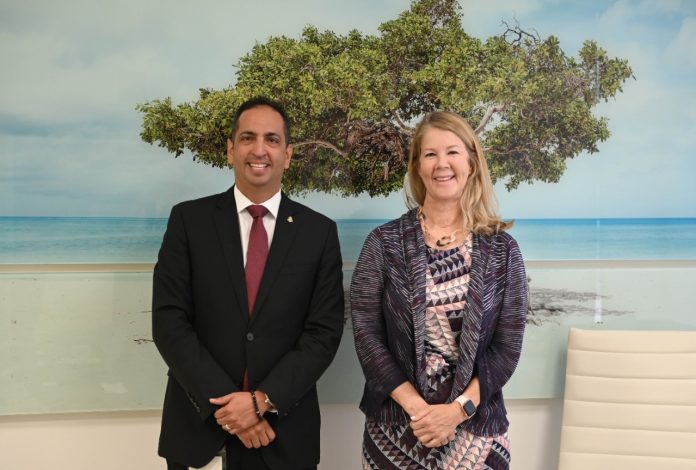 Yesterday morning, minister of Tourism and Public Health, Mr. Dangui Oduber held a meeting with American General Consul, Mrs. Margaret Bond. During this meeting they discussed various topics of interest which will reinforce the bonds between Aruba and the United States.

One of the topics discussed was the pre-clearance at the airport, seeing that currently the government of Aruba is negotiating a new agreement with the American government. The pre-clearance is something extremely necessary and something that greatly helps Aruba in the development of our tourism in the American market, according to a press release. Minister Oduber expressed his intention to maintain the pre-clearance as it is, seeing the benefits this has for our tourism. All of this will be done with help from the General Consul.

Another topic discussed during the meeting was the close contact that Aruba has with the United States, including contact with all American aviation companies. Oduber also brought forward the topic of Seamless Travel, which is a project that will help with the flow of passengers for Aruba and will also improve the experience of American passengers.

Consequently, the project of Queen Beatrix International Airport known as Gateway 2030 was also discussed. This project will greatly help with the flow of passengers and will also expand the capacity of Aruba’s airport.

Minister Oduber concluded by mentioning that “this was a very fruitful meeting during which Mrs. Bond expressed how happy she is with the cooperation between Aruba and the United States”. The General Consul also offered the Government of Aruba help for any strategy or vision it may have for the future.