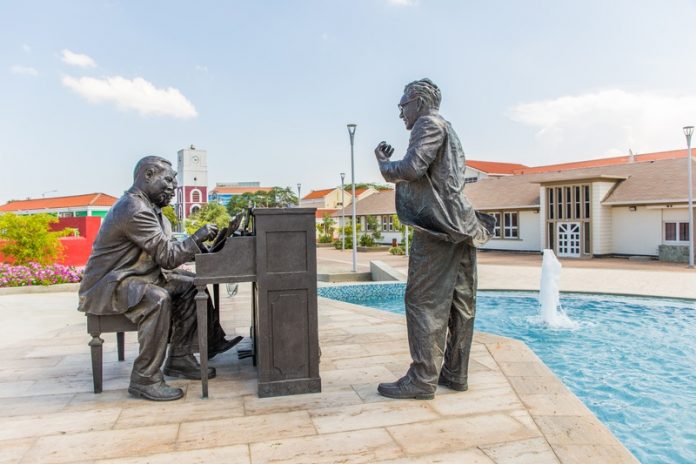 The Director of the Public Works Department (DOW, ing. Marlon Croes reported that the three fountains in Oranjestad are undergoing maintenance work.

These three fountains are:

Plaza Padu behind the Government’s Office;

Located between the Penha and La Moderna.

The lighting and electrical box were vandalized, and the lighting no longer works. The fountain is undergoing major maintenance, and the DOW ordered new limestone to replace the damaged limestone. Unfortunately, during the work, the contractor fell ill for some time, which caused a delay, but work will resume next week. Hopefully, they will complete it in a week or two.

Meanwhile, another contractor is installing the electrical cabinet and new lights so that they function optimally again.

This fountain had more pressing problems compared to the Plaza Padu fountain. Two palm trees planted in the middle of it grew considerably in the meantime. As a result, they cracked the fountain’s wall, but fortunately, the DOW moved these palm trees to the Bushiri area. Once moved, they immediately started working on the maintenance work.

Fountain between the Penha and La Moderna

This fountain has been a nuisance for some time, especially when it is full of water. The DOW pumped the water out, which is why it has not been operational for some time. The maintenance of this fountain is also in the DOW’s plan for 2023. However, considering the nuisance, it is necessary to discuss the future of this fountain and the best approach with the DOW, the government, and commercial guilds. According to the feedback the DOW received, there is an urge to remove the fountain to stop the nuisance, but the DOW needs to evaluate it to come up with the best solution.

According to the Director, “we will be throwing the towel in the ring” if they remove the fountain because of the nuisance since it will limit the development of the city’s center. One option is to completely renew and ensure that it is continuously kept in good condition and possibly install attributes that improve the area, such as good lighting, cleaning, maintenance, and supervision in the center which can reduce the nuisance.

Annelien Tromp-Diaz: ‘Life gives all of us the opportunity to be...