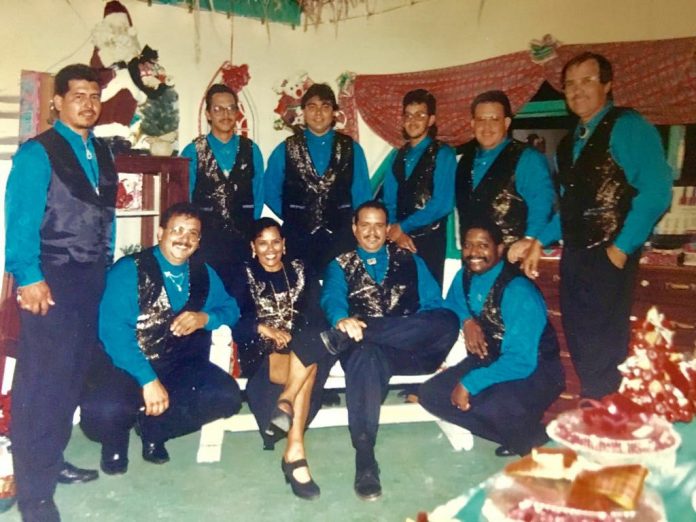 Linda was born on the 9th of May 1955 in Aruba. At a very young age, she discovered her love and talent for singing. It didn’t take long before she affiliated to the Santa Anna Choir and began dedicating to singing at the Santa Anna church in Noord.

IN 1979, Mr. Jossy Brokke Jr. organized a Mexican festival at the Club IOWUA, and here Linda participated singing the song ‘Los Laureles’ and was among the 10 finalists. She went on to represent Aruba in the grand Mexican Festival of the Antilles, which took place at the Holiday Inn hotel in Curaçao. Linda gave a beautiful performance that night. Back then, Linda wa spart of the Mariachi Montañeros of Noord.

Since that time, Linda continued dedicating to singing and continued demonstrating her talent and gaining experience as a singer of Ranchera music.

Linda Wolff was the main singer of Mariachi Guadarincana for a long time, where Linda would sing at family parties, birthdays, weddings and other special activities. She continued participating in most Mexican festivals, showcasing her love for this music genre, with her sensual voice and an attractive and charismatic personality which proved popular among those loving the mariachi music.

In a past interview, Linda said that back when she and her cousins were young teenagers, they started their own home ‘aguinaldo’ – traditional Christmas music – and together at the yearend they would sing all the Venezuelan carols: tucusito, o luna, fuego al canon etc. showing the joy and union that they had to enjoy and sing as a family.

Linda did not stop at mariachi music, but also dedicated herself to music and singing participating in different festivals, including Gospel, Dande, Tumba and a festival dedicated to our Flag and Anthem, 18th of March and folkloric music.

In many occasions, Linda was a finalist in these festivals by showing her beautiful voice in each song.

In 1994 she participated in the grand Festival Tipico y Dande and she was the first finalist in the female category.
In 2010, Linda participated in the Gospel Festival – Soldiers of Christ and finished in 5th place. The following year in the same festival she won second place.

In 2018, Linda received a well-deserved award at the Cas di Cultura, awarded by Fundacion Artistar during a Mexican music festival for children and youth. Linda took guitar lessons and she was accompanying herself for her favorite songs.

After a while, Linda integrated into the group Lirios del Campo by invitation and was directed by Mr. Vicente Tromp, with Linda as singer and guitarist.

Linda was part of Placentero Ritmo y Cuerde for many years.
Back in 1993, when Seaport Market Place would organize weekly activities including a Tropical Night, Placentero would animate this night with rhythm and flavor for tourists and locals to enjoy, and Linda was already part of the group singing and moving to the rhythm to the songs of their own production.

During her trajectory with this group, Linda sang many times at family parties and any celebration throughout the year. She participated in different festivals and had the opportunity of recording different songs for the yearend, many of them composed by Mr. Robert Maduro.

Linda Wolff was a great person and singer with an unmatched charisma, humble and charming character, always cheerful. Yesterday 18th of January our people said our final goodbyes to Linda in sadness but consoled by her beautiful and unforgettable memories.

Domestic Credit Surged: Summary of the Monthly Bulletin of September 2021