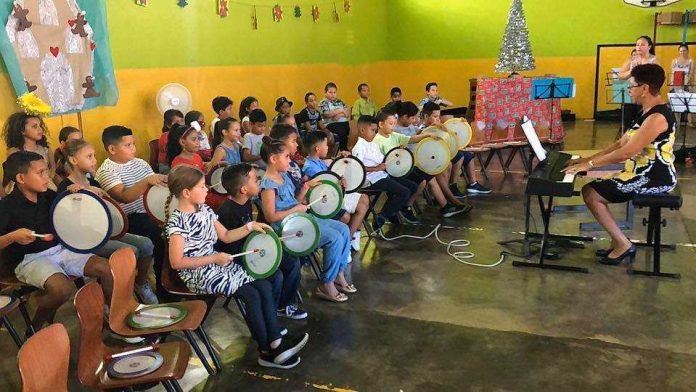 End of last year the Leerorkest Aruba was introduced, freely translated this is a Learning Orchestra. Originally, music plays a very important role in the culture of Aruba. In schools, however, creative subjects such as art and music have come last and more importance is now attached to language and math lessons. Leerorkest’s goal is to bring back the music in schools.

The initiative of the Leerorkest started in the Netherlands a few years ago, and now it is taken to the Caribbean islands. The organization is convinced that creative subjects such as making music together are just as important as learning to count, write and read. Many children often do not get the opportunity to take music lessons and / or learn to play an instrument due to their home situation. The foundation Leerorkest Aruba would very much like to change this and together with the Leerorkest Netherlands have made a start on Aruba.

A musical and social project

Leerorkest Aruba aims to give all children in Aruba the opportunity to learn to play a musical instrument, during and after school. It has now been scientifically proven that making music together is not only fun, but also very good for the total development of children. In this way they learn to work together, to build more self-confidence, and in addition their creativity is stimulated, their brain learns to make other connections and they learn to listen to each other in a positive way, to take each other into account and to help each other. “Music education has been shown to have a positive impact on IQ, learning performance, word analysis and phonological skills. There is also preliminary evidence that music education can facilitate foreign language learning.” (Quote from the chapter “The Value of Arts Education. Allegations and Evidence ” by Ellen Winner, Stéphan Vincent-Lancrin).

By introducing a Learning Orchestra in the schools, they can set up an accessible structure within the schools so that all children have a chance to discover and develop their musical talents. The advantage is that the lessons will initially take place during school time.

Children receive weekly lessons from a passionate music teacher. A start is made with general musical education lessons and this is gradually extended to the method of the Learning Orchestra: playing together on instruments in a real orchestra! Children learn in a playful and fast way to learn to play the violin, viola, cello, double bass, horn, flute, oboe or percussion and then play together in a class orchestra. The organization of the Leerorkest in Aruba is in the hands of the local organization Stichting Leerorkest Aruba (foundation: October 2019). For more information, check out their Facebook page: Leerorkest Aruba.