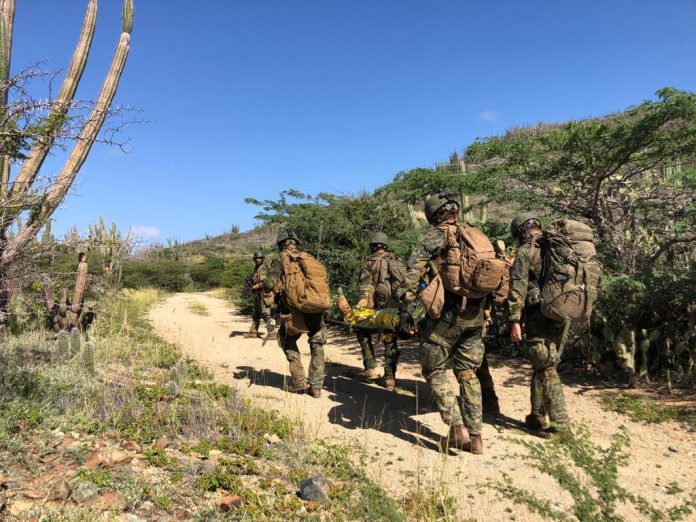 During the period of 12 up to and including September 22nd, the 40th. Rotation of the Company in the West (CidW), the army unit which is temporarily placed on a rotation basis with the Dutch Naval Forces in the Caribbean region, will be training together with Caribbean Military (CARMIL) on Aruba.

During these exercises different movements will take place on the island. This is both on foot and with (army) vehicles. Their base of operations will be the Marine barracks at Savaneta and they will be mostly seen on the East-side of the island.

The aim of this training is to get to know the country with its geography and population better, but also to practice one’s own tactics and techniques under aggravated climatic conditions. The facilities of the marine barracks and extensive nature reserves of Aruba lend themselves particularly well to this. Parts of this exercise include reconnaissance exercises (covertly mapping or monitoring an area or object), further developing one’s own specialist skills and improving general fitness. Since the Caribbean military personnel simultaneously carry out a training program, there will also be cooperation and knowledge exchange. This improves the bond between both units active in the Caribbean.

The CidW is an army company, stationed in Curaçao, which is alternated every four months by a next unit. CidW-40 comes from the Operational Support Command Land, one of the four brigades of the Royal Netherlands Army. This company has been reinforced with, amongst others, members of the construction engineering and the medical service. In this way, the company has a great diversity of specialties in the Caribbean region. The unit is also used to provide emergency aid or after a request for assistance from the local Government. The unit is brought in by the support vessel Zr. Ms. Pelikaan. They return by air transport, as the ship will then be deployed elsewhere because of the hurricane exercise ‘Windward Express’ on the Windward Islands.

Contemporary Art at the National Library of Aruba