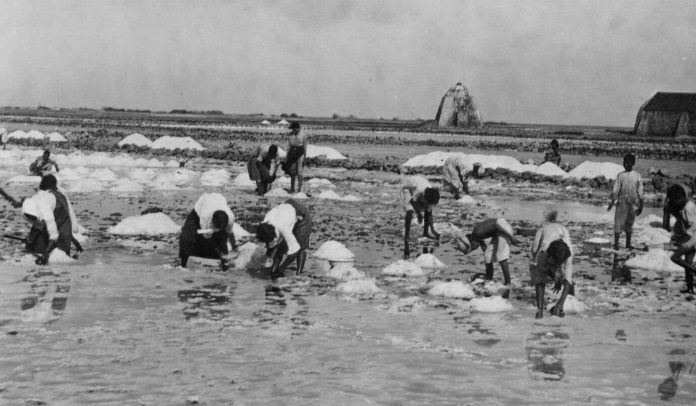 Entering the eighteenth century there lived, no others whites, reformed europeans on Aruba than the commander with his family and some other people in the service of the West Indian Company. In the latter part a few licences where granted. Trade with Spanish America is increasing. As a result of this Horses Bay; which from a nautical and strategical point of view offered more favorable conditions compare to Commanders’ Harbour in Savaneta, eclipsed the latter as a discharging-berth for cattle. Some merchants of jewish descent come hailing from Curacao, chose their residences in its vicinity, i.e. on higher ground, in direction of Ponton. No european has yet settled on the bay proper, we can only find an Amerindian village occupying both sides of a small sea inlet. The frist dwelling-houses are not built there before 1796 or 1797 when the first WIC battery has been constructed at the entrance in to the bay. Pic. 2. On this picture we people working the salt lakes of playa and still can see of the bulding, once stood as the Western fortification.

As early as 1762 The Directors of the West India Company had entertained a plan to construct a battery al Horses’ Bay for the protection of the ships in it from privateers. The high cost of providing this first more West situated fort with its batteries and supplies stalled the operations activities for time to time. In the meantime trade activities round Horses’ Bay continued to pick up and as a result the commander in the last quarter of the eighteenth century shifted his residence to the height close to Horses’ Bay, the place where the principal dwelling-centre of this period was situated, namely coming from the town- to the left of present day Ponton.

This location offered the additional advantage of an unimpeded view southward across the bay and what is today, Punta Brabo, whereas to the north it facilitated the commander’s supervision of the dwelling-place of the Amerindians of Noord and vicinity. It is no longer possible to ascertain when exactly the commander’s residence was shifted from commanders’ Bay to Ponton. However, Jan van der Biest Junior, who was commander from 1772 to 1782, was buried at Ponton, where his grave- its nameplate was unfortunately coverd by masonry when it was injudiciously repaired- is still to be seen, though at the moment it can no longer be identified. The graveyard itself, both within and without the walls, preserves a memory of what once was a residence of Aruba’s Protestant notabilities. On 13 June 1782 a third Van der Biest, Harmen, brother to Jan Junior, succeeds. He remains commander till 1791, when, at his own request, he is dismissed, as Hamelberg says “on the grounds of old age”. According to Dr.Krafft, however, he cannot have been older than about 66. Then Jacobus Pellicorne Porrier is in office for a year, and on 24 September 1792 Borchard Specht arrives. The Rev.Bosch says that he was born of a Utrecht family and married to the commander’s daughter Catharina Raders Poppe.

An historian who visited Aruba about 1825, relates that in his time he was still able to inspect the remnants of the commander’s house at Ponton. The masoned socket in which the flagpole had stood was intact yet. No prominent persons were living there any more, but there were still dwellings in the vicinity, where goats and sometimes also cows wer kept. From this point one a clear day one could distinguish the coastal silhouette of the isthmus of Paraguaná and its hill St. Ann the other side of the strait separating Aruba from the continent.

Pic. 5. In the center the Commandeurs house at the hill Ponton.

Discover an Aruba that no other could share with you and take your experience home with you. Our renowned indigenous and educative session has been entertaining curious participants for decades. Mail us at etnianativa03@gmail.com to confirm your participation. Our facilities are close to the high rise Hotels area.