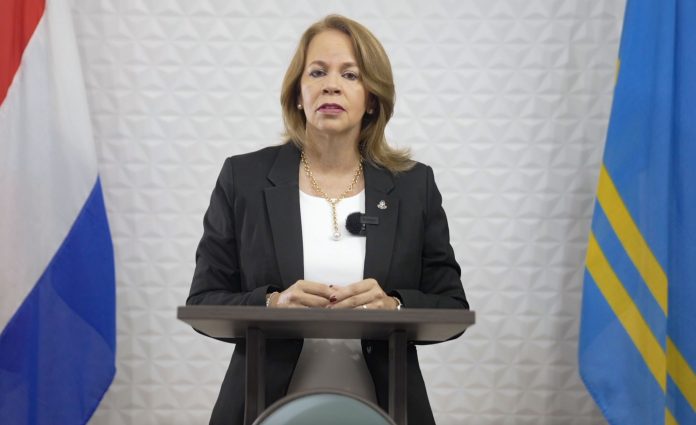 Yesterday morning, Prime Minister Evelyn Wever-Croes, in the name of the government of Aruba, expressed profound condolences and wished strength to families who last week and during the weekend lost their family members tragically.

At the same time, the Prime Minister urged each citizen to be more prudent in every aspect, particularly when leaving home to think that there are limits, and that each of us has to take care of each other.

Last Sunday at 10:35am, a traffic accident took place at Colorado, Aruba. Ambulance was sent with maximum urgency because in one of the cars, three people showed no signs of life and other four people were heavily wounded. The ambulance transported three children, aged 10 months, 3 years and 5 years, as well as an older person to the hospital. And by 11:28am, Doctor De Cuba pronounced the death of the three victims at the scene, Joanne Carolina Wouters (34), Mirella Jennyfer Wouters (35), and Rendrick Wouters (2).

Also during the early hours of the morning, a person was transported to the emergency at the hospital by a group of people, as he was giving no signs of life. Signs indicate that a 24-year-old man named Daniel presumably drowned during a pool party that started Saturday night and continued in the early hours of Sunday. Doctors at the emergency room of the hospital pronounced the death.

“This week starts with immense pain in our hearts due to the tragic weekend we went through. This after last week, a young man of barely 19 years old lost his life in a motorcycle accident.

“On Sunday, 4 citizens of our country suddenly lost their lives in tragic incidents in only one day. Two sisters together. One who died with her own 2-year-old baby, and together with her another sibling passed away and together leaving young children behind. A profound sadness for the families who lost three beloved family members, and there are more members of this family, in this case young children, who are fighting for their life. An enormous pain.

“From the government of Aruba, we wish the Wouters family and their friends a lot of strength during these extremely difficult and painful moments.

The tragic accident is already under investigation and I expect that soon the report will be ready, and if there are people who need to be held responsible for their actions, justice will take its course and deal with those involved in causing this horrible accident.

“Another tragic case that shocked us was the 24-year-old young man who drowned during a pool party. This incident is also currently under investigation and I expect that soon this report will also be ready. The Government sends condolences to his family.

“It’s true that the investigations that have already started, however I must say that investigation reports will not ease the immense pain of children, mother, father, grandparents and other family members.

We are now in the last three months of 2022. It is our wish that together we will get through to the next day, week and months with the least regrettable incidents possible. We can achieve this by being more prudent in every aspect of what we do. When you are on the road, think that it’s not just you on the road, there are other cars that have family members, mothers, children, grandparents aboard.

“For a small island like Aruba, to have four tragic deaths in one weekend is a very hard blow for our community. It affected me a lot, as it affected thousands of families in Aruba.

“I ask that we all join in heart and pray for the families of the victims. I wish our prayers and feelings of compassion can be a consolation to the families. Let us also pray for those who are in the hospital for their recovery. And that Mirella, Joanne, Rendrick, Daniel and Angel Gabriel may rest in peace in the arms of the Lord.”