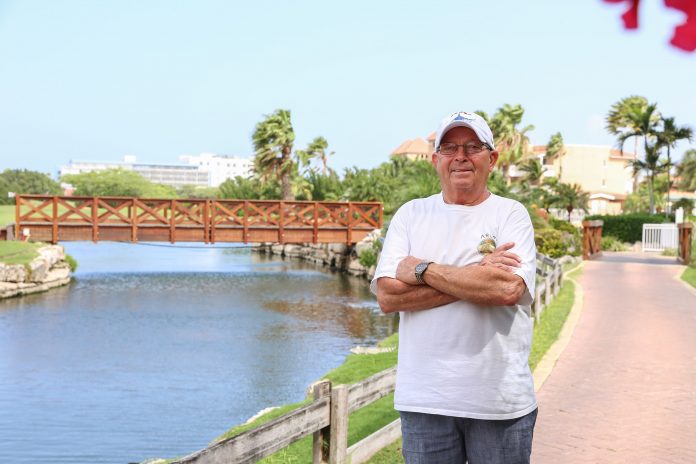 Aruba Today was visited by Mr. Ronald Ball from New York State, US recently. This lovely, repeat-visitor of Aruba wanted to share his experience of Aruba’s hospital, where he was treated after not feeling well during his vacation. “I just want people to know that you have great care and a great hospital. I don’t know how to write this down but my message is clear.” Dr. Alex Schwengle was the doctor on duty and praised by Ball for his excellent treatment that ultimately led into a diagnosis of an illness. “Years I have gone to doctors in the States and nobody could put a name on what my issue was. But Dr. Schwengle could.”

Ball feels great now, and is thankful for the care he had received. His sickness was taken seriously because they believed he had the Corona virus. “They speak good English at the hospital, give good attention and I experienced better service here than back at the USA.”

Good attention.
They have been coming here for over 25-years, and love the island. To get sick on vacation is very unfortunate and Ball is telling us his story. “I am 75 years old and recently when I came down in the third week, I was not feeling too bad but I was getting over a cold. Beginning of the fourth week, I had symptoms of a cold again. And one day I was very sick, coughing and with a temperature and all.” They wanted to go to Urgent Care but they could not find it, so he ended up at the emergency room of the hospital. “Immediately they thought maybe I had the Coronavirus, although they did not tell me that. They put me upstairs in the hospital in an isolated separate room, and they started checking all my vitals. I was put on oxygen and on some medication and that same evening I was put to bed there.”

The next morning Dr. Schwengle came in and informed him they know he did not have the Coronavirus, but he said, we are going to find out what exactly is the matter with you. “They put me on steroids and other things and moved me to the lower floor and that night he came again to visit me, and he says the medication he prescribed did not go well. So he was changing it because they needed to get the white blood cells correct.” The next day the doctor informed Ball that he was improving, but that he insisted to find out exactly what he has. Ball told him that some of these symptoms he was having for four years already and that he has been to five different doctors in the States, different lung, ear, nose, throat specialists but nobody could put a name on what his issue was.

COP diagnosed.
“It is a number of things that causes it, I know that but what it was exactly nobody could tell me. I kept improving while in Aruba’s hospital and the third day, Dr. Schwengle came in and he said I have COP*. He determined what this was and all these doctors in the States couldn’t. I was amazed.” Ball explains that it is a disease, there is nothing out there that can stop it from occurring but they can control it and help ease symptoms. “Today I feel great, I spent six days in the hospital and I had the best care. Every doctor treated me very well, as well as the nurses. I just want people to know why I am saying this, because so many times when I am talking to other people they warn me about the hospital – not to go there and avoid the place. I honestly disagree, because I had the greatest experience!”q