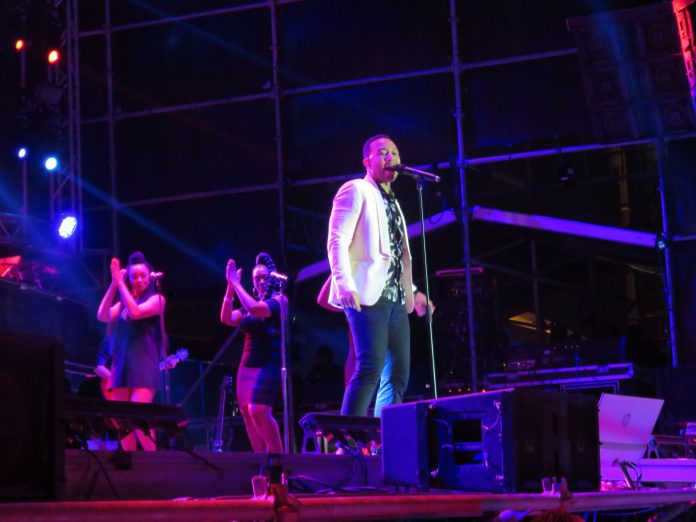 All stars twinkle but some shine just a little bit brighter. Sunday night’s Soul Beach Music Festival (SBMF) brought John Legend to the stage and he proved the adage to be true. This performer sings better than his tracks, more intense and yet his performance is so natural. Legend lived up to his name. The opening act was Ella Mai, fresh off her Grammy win for this year’s best R&B song. She enchanted the audience with her clear, pure and classic voice. SBMF presented another successful series of soul-sational nights. With the Grammy Award winning song,`Boo’d Up,’ Mai created a chill vibe where you just drifted away with the Aruban trade winds while listening to her. The London-born songstress moved to New York at the age of twelve and five years later, returned to the UK.

Mai said, “That helped me merge two sounds together. I have lived in the American culture in New York and without it being a conscious decision, it does influence my music. In the end however, I think music is universal, no matter where you are.”

It would not be fair to compare Ella Mai with the experienced on-stage performer Legend. Born John Stephens and married to model Chrissy Teigen since 2013, Legend’s star power shone extra bright to close out SBMF19. Legend is confident with a strong, pure voice and brilliant in holding sway over his public.

He played for one hour and twenty minutes, singing every song effortlessly. He alternated between moving across the stage or singing behind the piano, even once sitting atop the piano_ and even invited one lucky fan to dance with him as he belted out, `Slow Dance.’

To keep the evening simmering, Ella Mai returned to the stage to sing her hit, `Everything,’ featuring Legend.

The audience loved him and for Legend, the feeling was mutual. His genuine way gives his fans something to relate to, he doesn’t rise above them. During the interview he was asked, how does he stay this grounded? Legend responded, “I always have been like this, my parents raised me this way. In all the craziness that comes with the fame, I managed to stay peaceful and cool.”

SBMF closed down to prepare for another edition in 2020 which will be the 20th in the series. Be sure to follow the excitement and see which hot international stars will be hosting the festival next year. Follow the festival at Facebook Soul Beach Music Festival, www.soulbeach.net and on Instagram.q