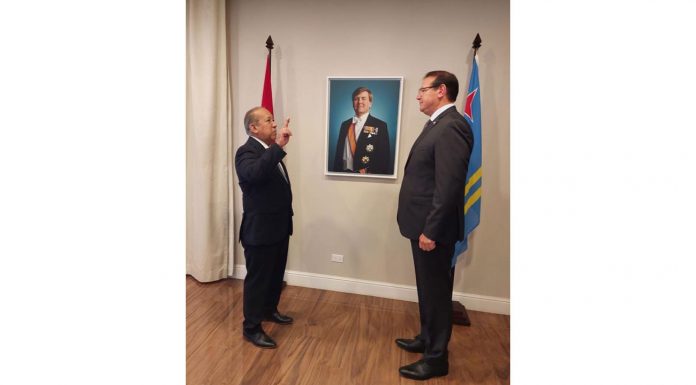 Governor of Aruba, His Excellency Alfonso Boekhoudt yesterday morning at the Ceremonial House of the Governor swore in Mr. Ady Thijsen as Plenipotentiary Minister of Aruba in the Netherlands.

After the swearing in, minister Thijsen gave a declaration in which he said he is extremely happy to see that during his political career, today he was awarded another responsibility that is not in the Parliament of Aruba. Mr. Thijsen said his only purpose is to work to benefit our country of Aruba and with a great honor he assumes this responsibility, which will surely not be easy.

Mr. Thijsen thanked the government of Aruba to trust him as Plenipotentiary Minister in the Ntherlands and at the same time, as representative of Aruba in the European Union.
He also took the opportunity to thank those who always supported him during his political career.

Pictures are courtesy of Arubahuis.