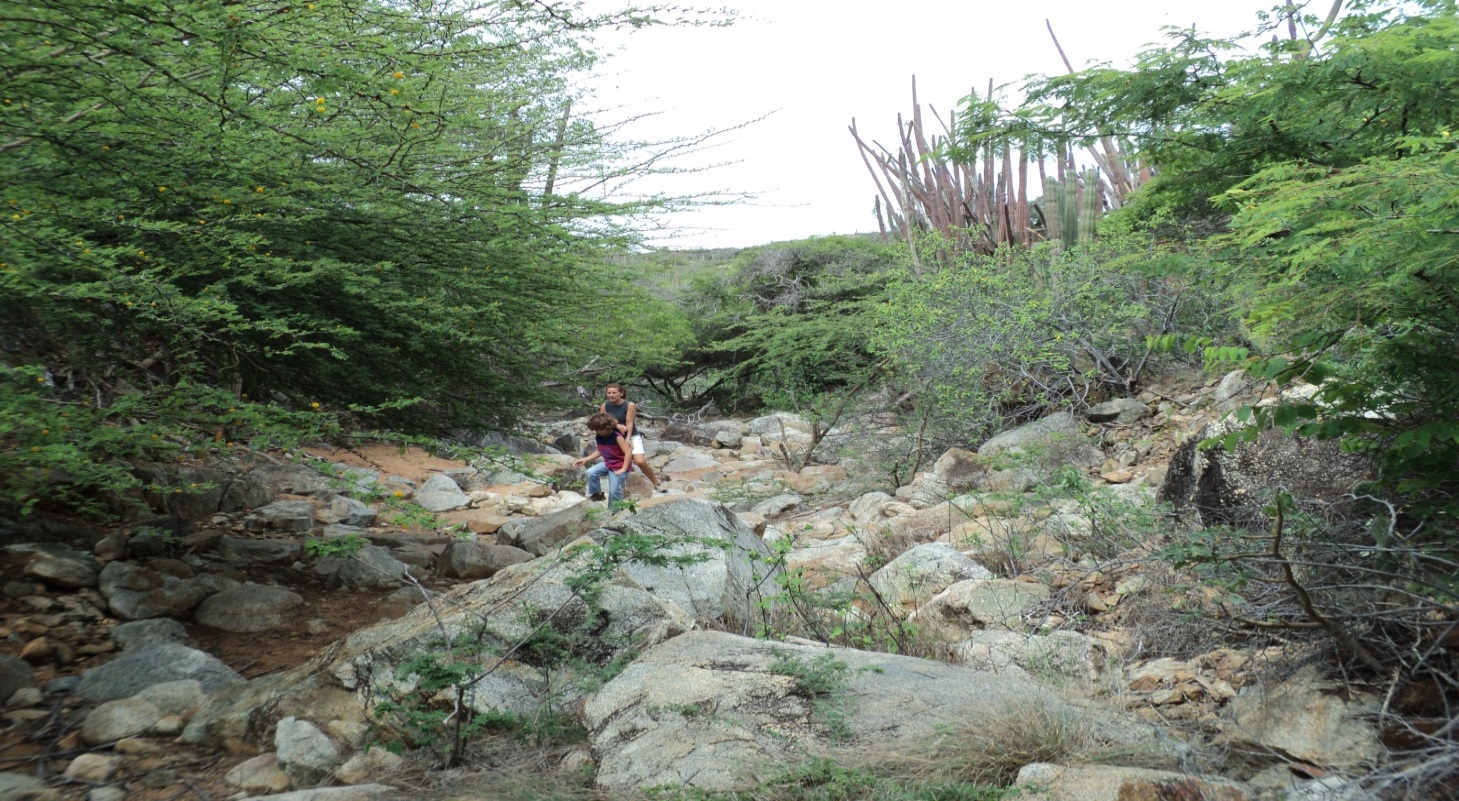 Each week we share the most interesting and revealing articles regarding Aruba “A destination to be explored”. We can find, and so doing uncover amazing and informative stories along the way.

The Quartzdiorite (QD) landscape in Sta. Cruz, Tanki Flip, Noord, Alto Vista and Sabaneta as mentioned, is where a number of relatively deep guts or dry rivers are to be found. The considerable amount of weathered material on top of the diorite basement is cut through by water during rainfall. Many of these guts contain large amounts of QD debris. This debris is the main geological component of the area around Sabaneta. The QD basement of these guts is impermeable, forming shallow natural water reservoirs in the upper lying detritus. The modern water reservoirs are mostly made near these dry rivers in the QD landscape. Most banks of these dry rivers show a black top soil layer forming an ideal place for vegetation. These favorable hydrological- and soil conditions of this landscape have been evident to Amerindians. The Hooiberg (166 m), a conical-shaped hill west of Santa Cruz is situated in the middle of the typical QD landscape. The main component of this hill is hooibergite. Other “foreign” phenomena in the QD landscape are the small hills at the north coast. Here gabbro is the main component. Although of different appearance, physical and landscape-forming characteristics, the QD, hooibergite, and gabbro have a common geological origin and are, in fact, one geological unit, called the batholith. The difference in landscape forming characteristics is the result of the difference in resistance to weathering of these rocks. Only one of the Preceramic sites is found in the QD landscape. Other Preceramic sites such as Arashi are situated near outcrops of QD. The site Barcadera is near large amounts of QD debris. The vicinity of these areas to the coast is for these two sites of more significance than the QD component, if we consider the characteristics of the preceramic groups. The largest Ceramic sites are situated in the QD-landscape. The favorable hydrological conditions created by the guts and the relatively good agricultural soil in the areas of Santa Cruz, Tanki Flip and Sabaneta, made long-term habitation by the ceramic groups possible. Two large guts run through the sites of Tanki Flip and Santa Cruz. Tanki Flip is in a flat area with only a few boulders. Santa Cruz is in a slightly undulating landscape with many QD-boulders. The guts here are relatively deeper than at Tanki Flip.

Sabaneta is situated at the end of a rooi in a QD –landscape with no boulders. This site is near the coast where mangroves and small beaches alternate. Another important site which is situated on QD debris is Parkietenbos. Two sites are here, at the east- and west bank of a large gut, the same gut that flows through Santa Cruz. The soil at Parkietenbos is comparable to that in Tanki Flip. The QD-landscape had a second important function for the prehistoric groups. Pictographs and petroglyphs are found on QD boulders. Most of the pictographs are found in the natural cavities of the boulders. These cavities are a product of chemical weathering of the rock and are always situated on the leeside of the boulder. Twelve of the seventeen rock drawing sites are in the QD landscape. Quartz diorite was used to make a variety of tools. It has the characteristic that it evens out easily after it’s chipped. The natural round form made it a good material to make grinding tools and sling-and hammer-stones. The natural cavities were furtherly deepened to make metates. Ancient Arubans knew very good how to implement what was on hand and even going so far to import types of stones such as chert and jade to make graters for grinding yucca roots in to flour. Ground raw grains, seeds or roots used to make many different foods. Cereal or tuber flour is the main ingredient of ayaca, tamal, empaná, pastechi, tortilla or pan bati (bread, which is the staple food for most Amerindian cultures).

We’ll be back next week for a following episode. Now, if you like our stories, book your reservation for a personal Etnia Nativa experience through etnianativa03@gmail.com and take Aruba home with you. q