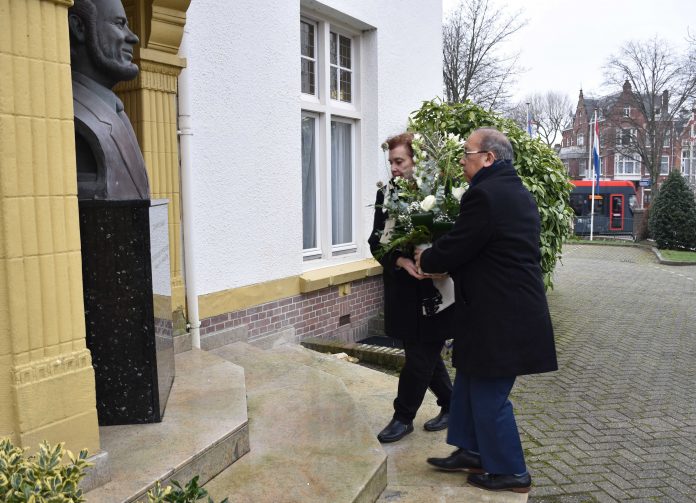 Plenipotentiary minister of Aruba, mr. Ady Thijsen and acting interim director of Arubahuis, drs. Glenda Hernandez on the 24th of January laid a wreath on the eve of Dia di Betico at the bust of Betico Croes to remember the birth of Mr. Gilberto Fraçoise “Betico” Croes, Aruban politician and statesman.

On the 25th of January, Aruba celebrates our national hero, Betico Croes. Gilberto Francois (Betico) Croes. He helped the island attain the Status Aparte – the status of autonomous country within the kingdom of the Netherlands, separate from the other islands of the Antilles.

Aruba was allowed to function as a commonwealth within the Dutch Kingdom and Betico is honored for this outcome since 1989 by celebrating the Dia di Betico. The official holiday normally features performances, sporting events and games throughout the island.

Croes himself was not able to enjoy the results of his ongoing struggle; he was involved in an accident on December 31, 1985, and went into a coma. He passed away on November 26, 1986. For the Aruban people, his words will never be forgotten. He told his people: “Si mi cay na caminda, gara e bandera y sigui cu e lucha” which means “If I fall along the way, grab the flag and continue the struggle.”

Betico was born on January 25, 1938. Croes had four children: two sons—Glenbert Croes and Gilberto Junior Croes and two daughters— Glendeline Croes and Guisette Croes. Both of Croes’ sons served as Ministers and Glenbert is currently in office as Minister of Labor. Betico was also the uncle of Aruba’s current Prime Minister, Mrs. Evelyn Wever-Croes.

The father of the Aruban nation or the Liberator (Libertador) as he is called often, was an active man in Caribbean organizations while he studied in the Netherlands. Betico was a social man, participated in sports and the social and cultural community. He worked as a teacher and instituted the official seal, flag and hymn for the island. During the Round table Conference of 1981, he was responsible for formally setting the date for Aruba’s independency. Betico also became leader of the political party Movimiento Electoral di Pueblo (MEP), now the main party that forms the current government that was elected in September 2021.

Images of the wreath-laying courtesy of Arubahuis.

During the first Ministerial Advisory of the year: The Aruba Amenities...