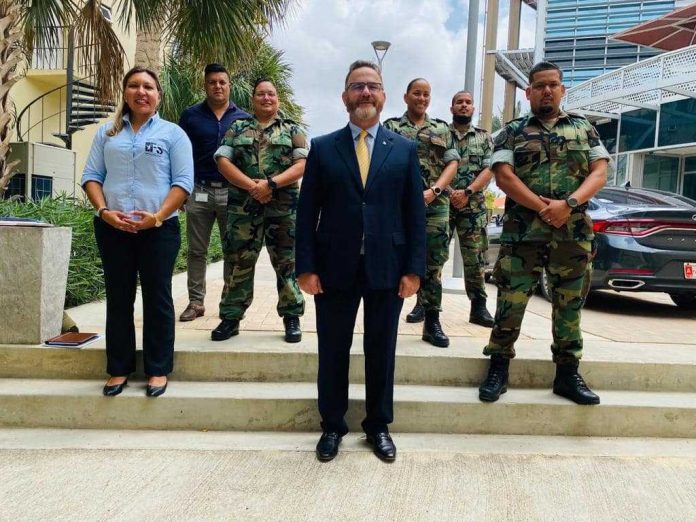 The very first training of the Social Training Trajectory (SVT) with women will start on Monday 23 August 2021. A total of 15 women show up at Marine Barracks Savaneta for their one-year training. Until now, training was only organized for men. The opening to women is a result of a new covenant that the government of Aruba and Defense signed together earlier this year.

The Social Training Trajectory is a training that consists of a military training part and an internship part. The training is intended for young people with a social disadvantage, who often have to deal with social problems. In the training, the young people learn values​​such as cooperation, respect, regularity, responsibility and discipline. They receive basic military training and at the end of the training part they earn a beret and certificate. After this, the young people have to do an eight-month internship in combination with following various courses/workshops, after which they complete the entire training. The young people are then prepared for a promising next step in civil society.

The military training part of the SVT lasts four months and is given at Marine Barracks Savaneta. The instructors are soldiers of the ARUMIL (Aruban Soldiers). The Aruban government also makes staff available for the training. During the military phase, the young people learn, among other things, exercise, they do a lot of sports, they receive self-defense lessons and they go on bivouac. They conclude the military phase with a final exercise that lasts a week.

In February of this year, the government of Aruba and Defense jointly signed a new covenant. The covenant is an elaboration of previously agreed agreements in the National Packages. From 2021, two training courses for men or women per year will be given on a structural basis, with a maximum of 30 people per training.

At the end of the first day, the Prime Minister of Aruba, Mrs. Evelyn Wever-Croes, and the Minister of Social Affairs and Labour, Mr. Glenbert Croes and a delegation, visit the women.