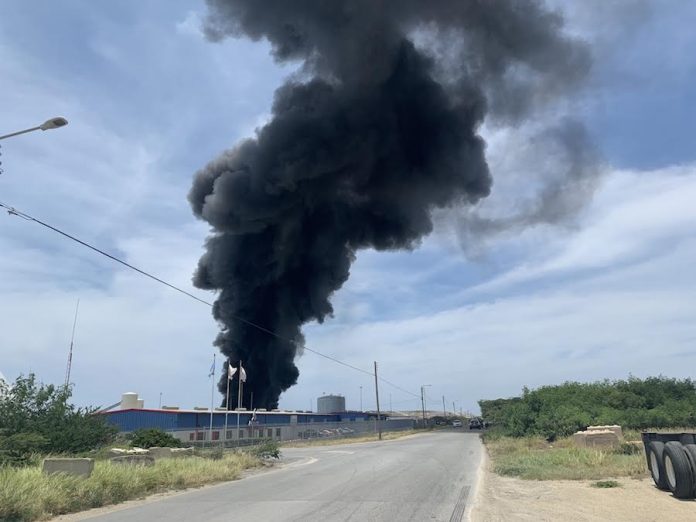 It was like reliving a trauma. That’s how Jessica Franken, executive at La Cabana, said about the fire that broke at Daltra, a recycling center, at the end of August. Jessica was not near Barcadera, where the fire took place, but her sibling was, at the Arugas offices. And for Jessica, the idea of gas and fire brought back traumatic memories that were simply too much.

She found herself calling 911 and did not give up until they answered the phone. “The phone rang about eleven times and when they finally answered, I said that they must evacuate everyone.”
Franken was thinking about her sibling locked up in their office at Arugas – the gas company, right next to Daltra – also reliving the tragedy of 1989. Back then, a tragedy of gas explosion at La Cabana took the life of one of her siblings’ colleagues as well as others, at the place where Jessica was working.

Since that day, Franken is nervous about gas and its dangers.

The other moment that is seared in her memory is the explosion at Montaña Apartments, where a 20 gallon gas tank exploded leaving victims, including dead, behind.

With her sibling in the offices of Arugas, without being able to leave despite the fire at the neighboring lot, Jessica experienced crippling fear that something more serious could happen. She was so glad that after two hours of calling 911, her sibling called her to say that police came knocking on the door and ordered everyone to evacuate the premises.

Sandra Besaril, on the other hand, was calm at APEX, which is also close to Daltra in Barcadera. She didn’t realize nothing about the fire until her colleagues came to tell everyone in the office. “I went outside to the parking lot when I noticed the fire was growing fast. It was then I realized that it was serious.”

Besaril and her colleagues did not evacuate immediately. “We were worried about what was happening. For our job but also the neighborhood, but afterwards, I went home.”

And Sandra felt that she could go home peacefully thanks to her own APEX colleagues, who did everything possible to make the area safe and then helped the Fire Department to fight the fire.
Our reporter understood that all equipment available was used to dominate the fire, something that worked. “More than anything I’m proud of my colleagues and to be part of this team”, Besaril explained.

Even though initially Jessica Franken had her thoughts about the fact that management of Arugas did not let the workers leave as soon as the fire grew, she is relieved that everything ended well. Even more, she was glad that after her sibling wrote a letter with suggestions, this was positively accepted by management.

The fire at the end of August scared a lot of people on Aruba. Emotions ran high because even though we are used to having fires at the dump in Parkietenbos, one in the area of Freezone, so close to other vital industries is a reality that hits hard. Everyone was aware of the danger should the fire expand.

And even though Rino Hermans – disaster management adviser, from Bureau Rampen Bestrijding Aruba (BRA) – was ready to tackle the crisis, “this was the first time in my career that I was scared”. And for Hermans to admit this is unusual, for a person who doesn’t allow emotions to dominate.

The reason for this was the combination of smoke concentration, the temperature of 38 degrees, and the fact that there was no wind. “At one point the wind fell to zero knots.” And when they received notification that the wind was coming back, but would bring the smoke in the direction of the neighborhood of Simeon Antonio, he decided to act. “We don’t know how many people have Covid-lungs and other breathing problems. Seeing the smoke concentration, I made the decision to call for evacuation.” Hermans was thankful that the association of general practitioners, HAVA, on their own asked everyone in the area to leave their homes. “The population also responded.”

A call for evacuation is not done carelessly, because people are asked to leave their homes and that means that the Fire Department must go into action to secure the entire neighborhood. On that Tuesday, a total of 48 police officers had to focus their work on the neighborhood to guarantee safety.

Despite the seriousness of the situation, Hermans says that neither doctors nor the local hospital reported cases of people who suffered from breathing problems. But in the group of people who were working hard to fight the fire, there was moments that action was needed, in some cases, to prevent problems. “It was according to our rehabilitation procedures, to give oxygen to the firemen who were working.” There is a rehabilitation procedure, together with IMSAN (Medical Institute San Nicolas) and ambulance personnel. “We had a trailer for that process.” That means that they had to keep an eye of who is fighting the fire, for how long, and they would call them back to the trailer to rest, cool their bodies, hydrate and for those who needed it, receive oxygen. Everyone had to rest 40 minutes in order to continue, this way, they could work for 24 hours fighting the fire.

And it was a challenge, because the temperature 100 meters away from the fire reached 120 degrees Celsius, on a very hot day without wind. “It wasn’t until the sun went down that it became a little fresher. I have been through a lot in my life, but this was really something tough. My reading glasses melted, to illustrate how hot it was. I don’t usually get scared, but this was abnormal.”

And this is the reason Rino Hermans is looking back with pride for the work that everyone did. They managed to keep the fire at Daltra and prevent it from spreading to APEX and Arugas.