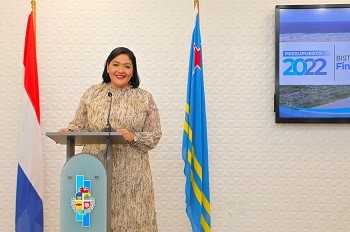 During the weekly press conference held, the Minister of Finance Xiomara Maduro gave information about the National Budget 2022.

The Minister shared the numbers that stand out for the year 2022, the changes that stand out compared to the 2021 budget, the financial needs for 2022, and the advice of the CAFT on the budget 2022 draft, including the government opinion.

Minister Maduro shared the numbers that stood out within the budget and changes compared to the 2021 budget. Personnel costs for 2022 have increased by 8 million to provide the 50% reduction of 12,6%. Service and Products increased by 26 million and are related to the introduction of the Family Justice Center, Bureau Cannabis, the Innovation Directorate, and to cover costs of the PPP projects that increase each year. The interest costs have increased by 8 million to cover 1014 million owed to the Netherlands and local lenders. Subsidies have increased by 10 million to help pay for the 50% of the 12,6% reduction. Direct taxes are forecasted to generate 64 million extra due to the 50% payment of the 12,6% reduction and the stop of financial support. Indirect taxes are estimated to increase by 42 million due to the improved economy. Investments increased by 16 million to help cover the required provisional solutions for the RWZI plant. Revenues are estimated to increase by 162 million based on an improved economy and the termination of financial support. Expenses will see a 120 million drop due to the elimination of the financial support.

According to the Minister, the total financial needs for 2021 were 1651 million florins, of which 1360 million to cover debt services and 291 million to cover the deficit. The debts services consist of 346 million foreign debts, and 904 million is payable to the Netherlands for their loan to cover the costs of the Covid pandemic. The 110 million is to be paid to local lenders. To help cover some of these debts, the Netherlands provided another loan of 523.1 million in September 2021. It covered 177,1 million foreign debts in 2021 and 346 million in 2022. As regards the Covid19 loan received from the Netherlands, the Government of Aruba is already negotiating with the Dutch authorities to refinance it as it will mature in March 2022. The local debt of 110 million will be financed by the local market as agreed with the Netherlands. The government must cover the 291 million deficit with liquidity support from the Netherlands or through loans from the local financial market. To implement Budget 2022, the Government of Aruba needs 1305 million florins.

Advise CAFT and the government reaction

The CAFT requests to reduce the service and products expenses to the 2020 level. According to the Minister, this is technically impossible since 2020 was not a regular operational year. The CAFT wants to eliminate the 50% cut of the 12,6%. The government is awaiting the Council of Ministers of the Kingdom of the Netherlands’ decision before making any changes. The CAFT requested to stop the salary subsidies controls before April 1, 2022, and to include this amount in the Budget of 2022. The government complied with the CAFT on this point. The CAFT also requested the to provide a financial overview of the fiscal changes in the Landspakket. According to the Minister, they anticipate 160 million for 2023, but since the law is not complete yet, they can not give a detailed overview for now. However, they can include in the budget through a note of amendment.

The CAFT also wants the government to eliminate the 2% reduction of the payroll tax introduced in January 2021. The government considered this in their fiscal changes in point C in the Landspakket. They can make the necessary changes through the note of amendment. CAFT also wants the government to explain the investment of 16 million in the RWZI. The government explained that this was a provisional solution since it does not have the 60 million to build a new facility. In other words, the government rejected advice 1 and 2. Advice 3 and 6 were changed before sending the budget draft to the Advisory Council, and advice 4 and 5 will be carried out through a note of amendment.

Family hike at the park

Aruba to Me: Ralph & Sandra Sloat