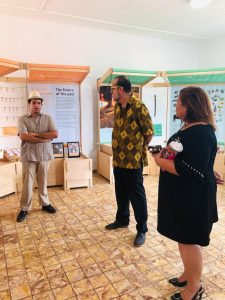 This time the temporary exposition mentioned will be in the neighborhood of Noord after it was in San Nicolas and Playa.

Fundacion Kapel di Bethania currently has an exposition in Imeldahof that tells the story of the chapel in Noord. In a jewel of a monument with an enchanting garden, you can enjoy and admire art and religious artifacts, with pictures that tell the story of the times of the nuns in the Imeldahof convent.

This exposition has been presented in The Netherlands, Aruba, Statia and other Caribbean countries in the same form with various topics. The topics are Multiculturality, Migration, Economic and Social exchange and changes in eating habits and beliefs. The educational character of Caribbean Ties has been amplified with 4 short video productions. Especially for schools and groups it is an opportunity that is unique to amplify the knowledge about the history if Aruba and the Caribbean,

MANA, Fundacion 1403 and Fundacion Kapel di Bethania invites the community of Aruba abd our visitors who wish to know more about the history of our wonderful Island to visit these 2 expositions which are open on Mondays, Wednesdays and Thursdays from 8:30 to 3:30pm at Klooster Imeldahof in Noord. We will be open during the upcoming holiday on the 18th of March. To organize a visit you can contact +2975828979.