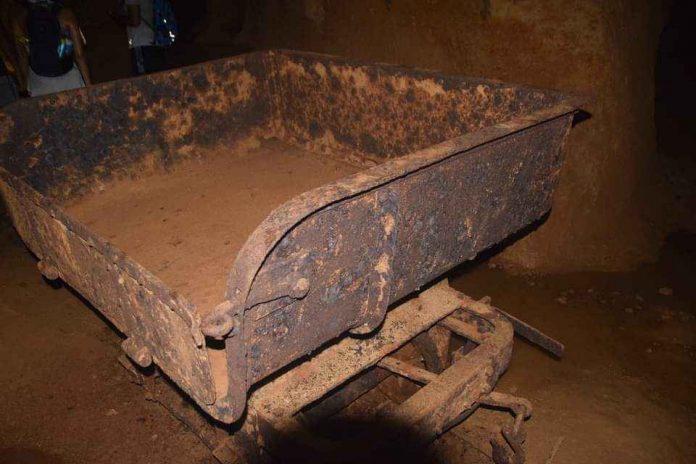 Explore one of Aruba’s most precious hidden gems, the Phosphate Mine hosted by The Shack Aruba. The tour will be presented by Mario Perez who has and is still exploring this Mine for more than 20 years now. After the introduction you will take a ladder down approximately 30ft deep and start exploring.

Bring your own flashlight and refill bottle. Sportive clothing and shoes are required. Rules and regulations according to the department of health will be strictly followed. Maintain social distance at all times. Reservations are required. Call or whats app at +297-597-4267 for more information

About the Phosphate Mine

Phosphate was discovered at Seroe Colorado, at the southeastern tip of the island, in 1874, and in 1879 the Aruba Phosphate Co. (APC) was founded. The company very quickly realized that shipping the ore by donkey to San Nicolas harbor and then by lighter to the larger ships would be a problem, and as a result it was decided in 1880 to build a modern L-shaped steel pier at San Nicolas, linked to the mines by a 30 inch, 762mm, gauged railway. A steam tug was also ordered to assist steam ships to dock. By the end of 1881 the 7 km railway serving the mines at Seroe Colorado and Seroe Culebra, with one small English-built steam locomotive, was completed. By the end of 1881 a second loco of the same type was ordered, each could haul 10-12 loaded tipping cars downhill to the pier, where the ore was unloaded directly into the waiting ships. Business boomed so much that in 1882 a more powerful 0-4-2T, capable of hauling 30 cars, was ordered from H.K. Porter. Workers were able to load up to 300 tons per day, which was the average capacity of the three-masted ships in the West Indian phosphate trade. Aside from 91 tipping cars, the APC also owned a one-axle inspection coach lettered ‘A’.

However, due to large discoveries of phosphate in the U.S. and elsewhere for fertilizer, by the mid-1880s demand started to decline. Following the outbreak of WWI in 1914, cutting off supplies and disrupting shipping, the company made the decision to shut down. The mines were closed and the locomotives abandoned on a siding a Seroe Culebra. In 1915, a representative for Shell Oil signed a deal to buy the rails and tipping cars for use at the Shell Oil refinery construction site in Curaçao. Only some rails remained on the pier and in the harbor area at San Nicolas. In the mid-1930s the locos were pushed into the mine pit at Seroe Culebra and covered with trash by crews of the Lago refinery.