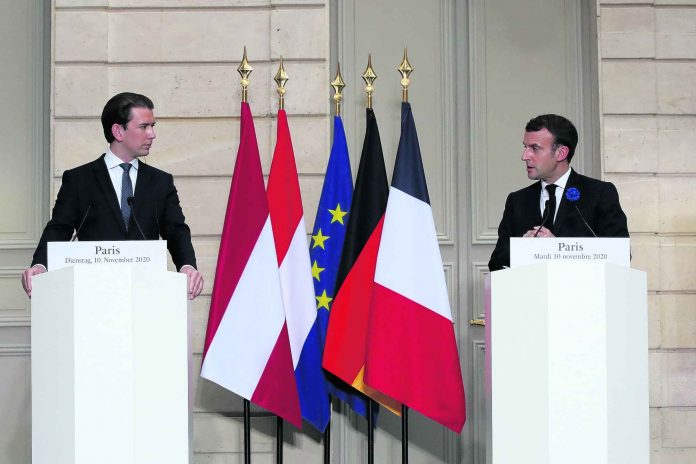 French President Emmanuel Macron said Tuesday that extremist attacks are a “European reality” and the European Union must tighten the screws on weak spots like external borders and the internet after two deadly extremist attacks in France and another in Austria in recent weeks.

The response to terrorism and radicalization must be “common, coordinated, rapid,” requiring “methodic” work before a meeting of European heads of state in December, Macron said.

The response to terrorism and radicalization must be “common, coordinated and rapid” with “methodic” work in the weeks ahead, before a meeting of European heads of state in December, Macron said.

Extremist attacks have bloodied numerous EU countries over the years. Macron noted that on Friday, France will mark the fifth anniversary of the Paris attacks that killed 130 people at a music hall and cafes on Nov. 13, 2015.

The French leader stressed the need to develop a shared database and improved police cooperation, and said he wants a “deep reform” of how the external borders of Europe’s visa-free travel area are policed, a plan he made public last week.

“All weaknesses at the external border or in one member state is a security risk for all members,” Macron said.

He additionally wants to get “terrorist content” pulled from the internet within an hour of its appearance, “something that must absolutely be put in place in the weeks ahead.”

The EU’s national leaders will review the situation at a December meeting, Michel said.

The conference came a week after a man who officials said had tried to join the Islamic State group shot four people to death in Vienna before police shot and killed him. The shooting has strengthened calls in Austria for a crackdown on Islamic extremism.

In France last month, an Islamic extremist killed three people in a church in the French city of Nice, and another extremist beheaded a teacher near Paris because he had shown his students cartoons of Islam’s prophet for a discussion about freedom of expression.

As a result of the attacks, Macron last week proposed tighter controls on the EU’s external borders, more coordinated policing inside the bloc’s visa-free zone and changes to EU migration policy.

Austria’s Kurz cited the need to better cope with imprisoned ex-jihadis, many of whom will be freed after serving time. He called them “ticking time bombs.”

“We have a permanent danger among us,” he said of foreign fighters returned from Syria or Iraq. He said their freedom should be limited to protect society.

The Austrian leader also denounced “political Islam, radicalization” as the background noise in European society, “the poison, the breeding ground for terrorism.” That dovetails with Macron’s planned law to fight “separatism” that is aimed at routing out those espousing radical Islam in France.

The leaders of Germany and the Netherlands both stressed the goal is not to stigmatize Islam itself.

“This is not about a confrontation between Islam and Christianity, for example; this is about the democratic model of society having to confront terrorist and anti-democratic behavior, and with great frankness and determined strength,” Merkel said.

Rutte warned against singling out groups of people due to their origin or religion.

“This is not a conflict between Christians and Muslims…No. It is a fight between civilization and barbarism,” Rutte said.