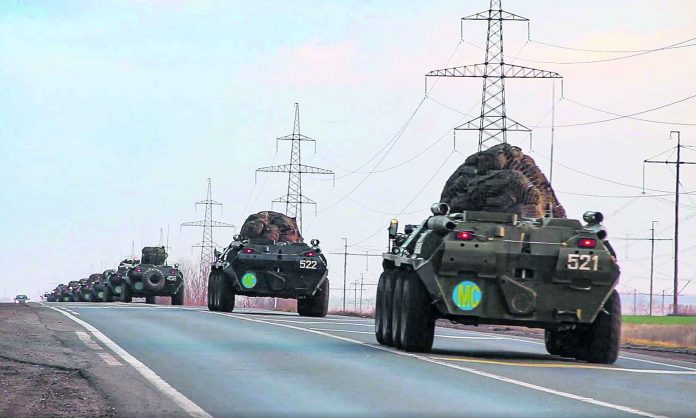 Dozens of Russian peacekeepers destined for Nagorno-Karabakh began deploying Tuesday, hours after Armenia and Azerbaijan agreed to halt fighting over the separatist region and amid signs the cease-fire would hold where others hadn’t.

The truce came after significant advances by Azerbaijani forces that the Armenian-backed leader of Nagorno-Karabakh said made it impossible for his side to carry on. It was celebrated in Azerbaijan, but left Armenians bitter, and many stormed government buildings overnight, demanding Parliament invalidate the agreement.

The two countries have been locked in a conflict over Nagorno-Karabakh for decades, and there were concerns the hostilities could escalate and draw in Turkey, which threw its weight behind Azerbaijan, and Russia, which has a security pact with Armenia.

If the truce proves lasting, it would be a major diplomatic coup for Russia, which appears to have brokered a deal where others failed and was in a tight spot since it has ties with both sides. Turkey also seemed to come out well, though it remained to be seen if it would be able to expand its influence by securing a higher-profile role in the peace process.

Nagorno-Karabakh lies within Azerbaijan but has been under control of ethnic Armenian forces backed by Armenia since a separatist war there ended in 1994. Heavy fighting erupted in late September — the biggest escalation of the conflict in a quarter-century — and has left hundreds, possibly thousands, dead. That includes some 1,300 Nagorno-Karabakh troops, according to the region’s officials, and scores of civilians on both sides.

Several cease-fires announced over the past six weeks crumbled almost immediately, but the current agreement appeared to be holding, with neither side reporting any more fighting since it came into force.

It came days after Azerbaijan, which has claimed numerous territorial gains, pressed its offensive deeper into the region and took control of the city of Shushi, strategically positioned on heights overlooking the regional capital of Stepanakert.

Nagorno-Karabakh’s separatist leader Arayik Harutyunyan admitted on Tuesday that “had the hostilities continued at the same pace, we would have lost all of Artsakh (an Armenian name for Nagorno-Karabakh) within days.”

Armenian Prime Minister Nikol Pashinian said it was “extremely painful for me personally and for our people,” calling the situation a “catastrophe.”

But Pashinian said he was left with no choice and the army had told him it was necessary to stop the fighting.

The pact was announced by President Vladimir Putin personally early Tuesday, several hours after Azerbaijan downed a Russian helicopter that was flying over Armenia, killing two crew members aboard.

The agreement calls for Armenian forces to turn over control of some areas it held outside the borders of Nagorno-Karabakh, including the Lachin region, which the main road leading from Nagorno-Karabakh to Armenia passes through. The agreement calls for the road, the so-called Lachin Corridor, to remain open and be protected by Russian peacekeepers.

It also calls for transport links to be established through Armenia connecting Azerbaijan and its western exclave of Nakhchivan, which is surrounded by Armenia, Iran and Turkey.

Russia’s Defense Ministry said Tuesday that at least 22 planes will be used to transport the peacekeepers, and 12 have already landed in Armenia, on their way to Nagorno-Karabakh. A total of 1,960 Russian peacekeepers are to be deployed under a five-year mandate.

Russia, France and the U.S. — co-chairs of the Minsk Group, set up in the 1990s by the Organization for Security and Cooperation in Europe to mediate the conflict — have been trying to secure a cease-fire for weeks, but the efforts yielded little progress.

Putin on Tuesday called the fighting in Nagorno-Karabakh “a truly great tragedy” and expressed satisfaction over “agreements reached to end the bloodshed.” Some lawmakers touted Russia’s success.

“Russia managed to do what neither (U.S. President Donald) Trump, nor (French President Emmanuel) Macron did — to end a war,” Yelena Panina, at lawmaker in Russia’s lower house of Parliament, said Tuesday. “Our country has once again reaffirmed its status of a guarantor of peace in South Caucasus.”

The truce was also welcomed by Iran, which has borders with both Armenia and Azerbaijan and has been worried by the fighting after stray mortar rounds and rockets on occasion injured people and damaged buildings in rural areas near the borders.

“This is a great success,” Turkish Foreign Minister Mevlut Cavusoglu told a news conference. “Territories that were under occupation for 30 years are being taken back.”

Leaders of Azerbaijan and Turkey announced that Ankara will be involved in monitoring the cease-fire along with Moscow as part of a peacekeeping center, which will be set up to host both Russian and Turkish military.

Russian Foreign Ministry spokeswoman Maria Zakharova said Tuesday that the center will be located in Azerbaijan and isn’t connected to the peacekeeping efforts outlined in Tuesday’s agreement. Rather, it is “a completely different mission, another part of joint efforts,” Zakharova said.