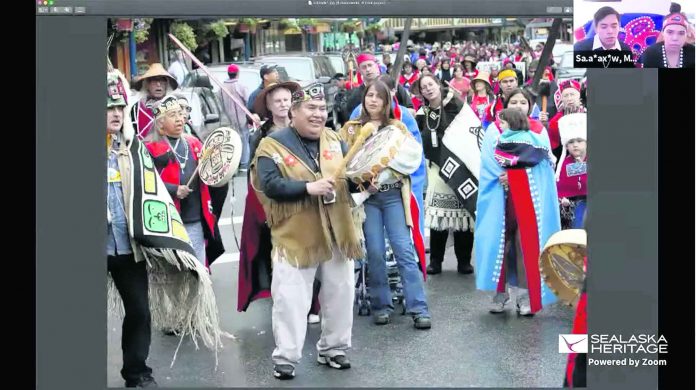 When a Tlingit elder dies, leaders from the Alaska Native tribe’s two houses, the Raven and Eagle clans, typically come together along with family and well-wishers for a memorial ceremony featuring displays of traditional tribal regalia.

After elder, tribal leader and college professor David Katzeek died last month, the tribe scrambled to find a way to observe their sacred traditions while keeping everyone safe during the pandemic, with coronavirus cases surging in the state.

“We know that many of our people are grieving over this great loss, but we also recognized that we need to protect each other and make sure we stay healthy. We also wanted to honor Kingeisti in our traditional way,” Sealaska Heritage Institute president Rosita Worl said, using Katzeek’s Tlingit name.

Katzeek, 77, died unexpectedly Oct. 28, according to the Juneau-based institute, an Alaska Native nonprofit that promotes Tlingit, Haida and Tsimshian cultures. Worl said they understood the cause to be heart failure.

The first president of what has since become the institute, Katzeek is credited with helping revive Alaska Native culture in the state’s southeast, encouraging oral histories and efforts to preserve the Tlingit language.

To honor him safely, the institute turned to the same technologies that people across the world have employed to remain connected in the coronavirus age, using Zoom video conferencing to bring people together while broadcasting live on its YouTube channel.

The institute had already been transforming in-person programming such as theater lectures to virtual events due to the coronavirus.

They figured, “If we can do that for all of these other activities, why can’t we do that for our cultural activities?” Worl said.

During a memorial ceremony, leaders of the clans typically offer comforting words while also bringing out regalia such as Chilkat robes, clan hats and blankets, invoking the spirits of clan ancestors to assist the grieving process.

Held virtually, there had to be some adjustments such as not having people stand near others in support but instead taking turns speaking on the video call. The chatroom served for tribe members to give the traditional thanks to speakers and comfort others. The clan regalia was visible in the background of those who spoke instead of being displayed in front of a coffin or held in person as at a traditional memorial.

Perhaps the biggest change was capping how many could speak and limiting each person to five minutes. So while memorials can run as long as 10 hours, this one happened in just about four.

Holding the memorial online had at least one advantage, in that it allowed some 2,000 people to take part from New Mexico to California — “they were all over the country, wherever our clan members are living,” Worl said.

She said the memorial was an innovative and successful merging of traditional rites with modern technology and the public health and safety requirements demanded by the pandemic. The institute is now using the experience to write guides for others to do the same.

“One of the strengths of our people is our ability to transform our cultural needs to current circumstances … while at the same time maintaining our culture,” Worl said.

House Democrats getting down to the grunt work of governing