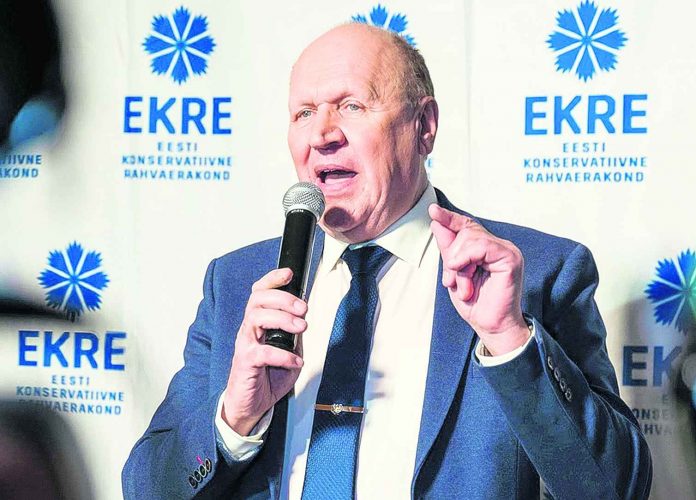 “Last night I decided to resign (when) looking at the slander and lies produced by the Estonian media,” said Helme, of the Estonian Conservative People’s Party, or EKRE.

“I am tired. I did nothing yesterday that would endanger Estonia’s security. I have not said anything that has not already been told by the American media, the American free media,” he told public broadcaster ERR.

He made the remarks on Sunday in an Estonian radio show which interviewed both Mart Helme and his son Martin, who is the country’s finance minister. They also discussed a hypothetical scenario of a U.S. civil war after the election result.

U.S. President Donald Trump “will win eventually. It will happen as a result of an immense struggle, maybe even bloodshed but justice will win in the end,” Mart Helme told the TRE radio station according to local media.

“There is no question that these elections were falsified,” Martin Helme said in the interview, according to Estonian news portal Delfi and national broadcaster ERR. “I believe all normal people should speak up against it. There is no point in talking about democracy or rule of law in a situation where elections can be faked so plainly, boldly and on a massive scale.”

The populist EKRE, which Helme co-founded and has an anti-immigrant and anti-EU agenda, emerged from a March 2019 election as Estonia’s third-largest party.

On Monday, Martin Helme told reporters that what he said was what “the whole of the U.S. media is saying. The press (in Estonia) is not telling the Estonian people what the entire American media is saying, but I did it — election fraud,” the younger Helme said, according to the Baltic News Service.

The comments are seen as highly embarrassing to Estonia, a small former Soviet republic of 1.3 million and a European Union and NATO member that is a staunch ally of Washington.

In a statement issued Monday, Ratas said that “In the current situation, Mart Helme’s resignation is the only way for the government to continue its work, including foreign policy goals.”

Martin Helme, 44, and his father Mart, 71, have been embroiled in various political scandals in past few years due to their controversial public comments.

In October, Mart Helme told German broadcaster Deutsche Welle that marriage should only be a union between a man and a woman and suggested that gay couples should go to Sweden. Martin Helme has insisted that his father’s interview was mistranslated, and Mart Helme has denied being homophobic.

Okinawa marks 50 years of end to U.S. rule amid protests