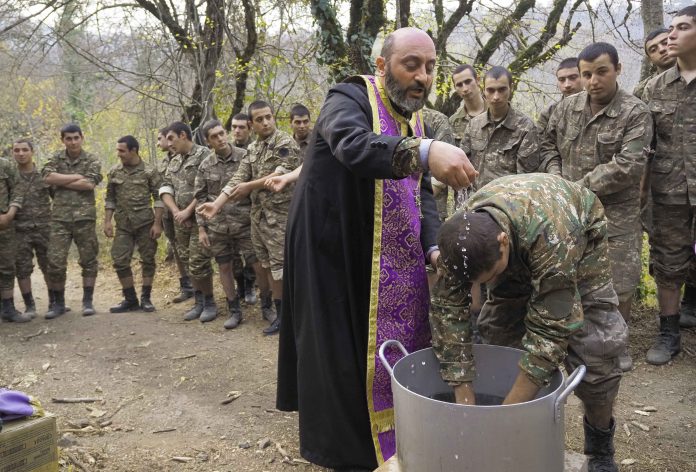 In a wooded area of Nagorno-Karabakh, new recruits to the war besieging the region are underwent a ritual Monday they hope will help them endure the fight — baptism into the Armenian Apostolic Church.

One by one, the young men in camouflage fatigues approached a priest, who dipped their clasped hands into a water-filled kettle and then anointed their heads and necks. Afterwards, the young men stood at attention as the priest hung wooden crosses around their necks.

Their faces were impassive, but one betrayed the emotion churning beneath by kissing the cross.

“The baptism cleansed us and helped us forget about the horrors of the war,” Tigran Kagramanian, an 18-year-old recruit, told The Associated Press after the Monday ceremony.

The fight between Armenian and Azerbaijani forces that began in late September is the worst eruption of hostilities over Nagorno-Karabakh in decades. The region Azerbaijan has been under the control of local ethnic Armenian forces backed by Armenia since the 1994 end of a separatist war that killed an estimated 30,000 people.

Several cease-fires have been declared, then ignored within hours. The Nagorno-Karabakh defense ministry said Monday that 1,177 Armenian fighters have died in the war, including the region’s deputy defense minister.

Azerbaijani authorities haven’t disclosed their military losses, but say the fighting has killed at least 91 civilians and wounded 400.

In the most recent attempt to defuse tensions, the foreign ministers of Armenia and Azerbaijan met Friday in Geneva for a day of talks brokered by Russia, the United States and France, co-chairs of the so-called Minsk Group of the Organization for Security and Cooperation in Europe, which tries to mediate the conflict.

The talks concluded with the two sides agreeing they “will not deliberately target civilian populations or non-military objects in accordance with international humanitarian law,” but the agreement was quickly challenged by reports of shelling of civilian settlements.

Azerbaijani President Ilham Aliyev has said that to end hostilities, Armenian forces must withdraw from Nagorno-Karabakh. He repeatedly criticized the Minsk Group for not producing progress and insisted that Azerbaijan has the right to reclaim its territory by force since international mediators have failed.

Azerbaijani troops, which have relied on strike drones and long-range rocket systems supplied by Turkey, have reclaimed control of several regions on the fringes of Nagorno-Karabakh and pressed their offensive into the separatist territory from the south.

The newly baptized soldiers and the priests who blessed them are prepared for more suffering to come.

“We came here to inspire, but it is us who are inspired, looking into the eyes of these young guys, who fully understand the situation and are nonetheless ready to take on this martyrs’ death, knowing that behind them are their shrines, their families and their mothers,” said one of the priests, Aristakes Hovhannisian.