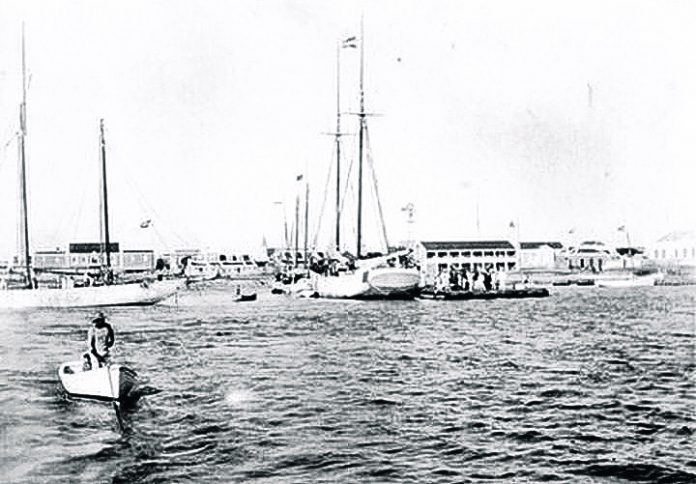 It was in the first week of January 1885; Aruba had received an interesting visitor in the person of a German Professor, Dr. K. Martin of the Leyden University who was a passionate Geologist with a special interest in moths and butterflies. He came for agro-geological research, but left a book of cultural- historical value and he was accompanied by the students Van der Pol, De Haan and Molengraaff, and also by Professor Dr. Suringa. The island journey was planned to start on the 29th of January, at six o’clock in the morning. Professor Martin is the one who will narrate his adventure: “We were to depart, but we were about to experience that time is something scarcely heeded on Aruba for of the five donkeys and three servants we had managed to obtain with great difficulty the previous evening nothing was as yet to be seen. True, our guide gave himself every conceivable trouble to accelerate our journey, but only after the lapse of more than an hour was everything ready, the donkeys with their saddles and girths having meanwhile been wetted through by a sudden shower.”

Past Hooiberg and the picturesque fields the company journeyed to Santa Cruz, reaching the road via Spanish Lagoon in order to go from there to the extreme eastern point of the island, Ceru Colorado. The Hooiberg in the back

“For a considerable time masses of stone having the height of good-sized houses and consisting of heavy worn-off diorite rocks grayly striped by the weather are the only objects arresting our attention in the midst of the high cacti surrounding them, for the sandy soil stretching between is very thinly covered with plants and its monotonous hue is rather enlivened by the bluish green backs of lizards than by any vegetation. Our eyes are aching and we prefer to lift our glance from the shade less road.” He continues his story: “About noon we arrived at Spanish Lagoon on the south-west coast of the island, where we encountered numerous petrifactions. Behind this lagoon a few coconut trees offered a shady place of repose on the alluvial sol. But any attempt to lie down on the ground and stretch our limbs was prevented by the stony surface of this extremely thinly grown spot. Our boxes were taken off the donkeys, and we sat down on them whilst the animals were being watered, coconuts provided us with a refreshing beverage, the enjoyment of which was not spoiled by our having procured them in an illicit manner. After scarcely an hour’s rest the insistent thought of the long distance we still had to cover made us rise again.” Cunuco country road with boulders as big as a house

From then on their way without interruption led across coral formations arisen in later times and bordering the west coast of the island. The uniformity of the landscape, the barren rock-soil and the sea baffle every description. In the plain stretching far and wide before them the big Strombus and cone-shaped boulders were the only objects on which the eye could rest.

“Under these circumstances it was an agreeable diversion to see the scenery enlivened by some human beings, at whose behavior we could not help laughing at times. They were a couple of boys who had drawn water from a small well dug into the coral and were carrying it in tubs on the backs of donkeys to their far homesteads. One of them had a big drum, a musical instrument whose existence in this region deserted of all mortals I am as yet unable to explain but whose sound appeared to fascinate our worn-out animals. However that may be, we were entertained by this music walking some way in front of us and it is with thank-fullness that I always think back to this benefaction, for our lazy donkeys kept pace with those plodding before us and when they finally left us we already arrived at Sint Nicolaas. There, in the distance, on the blue waves, we discerned the white sails of the Essex, which had taken us to Aruba yesterday and was now struggling close-hauled against the trade wind on her voyage back to Curacao.”

To get to know more about Aruba’s stories of origins, about animals and culture, art and desert gardens you can visit Etnia Nativa. Our renowned cultural encounter session has been entertaining curious participants for decades. Mail us at etnianativa03@gmail.com to confirm your participation. Our facilities and activities take place close to high rise hotels. q

Island Insight Episode XXIII: The Aruban way of life since 1678