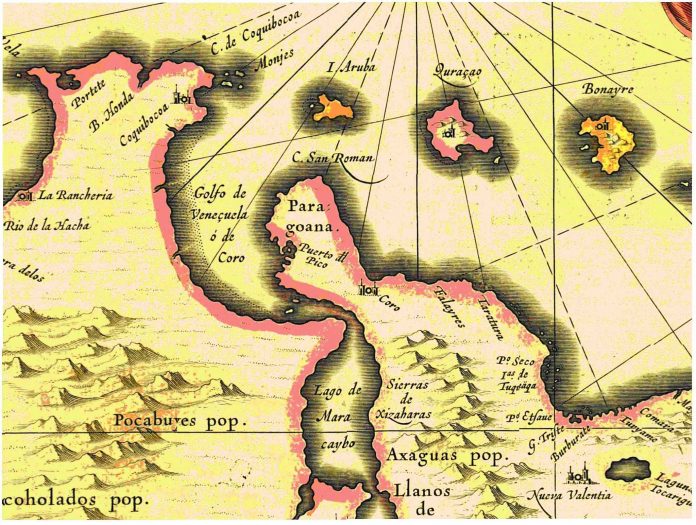 From the end of the sixteenth century the Dutch began exploring the Spanish new world territories and were first seen in 1585 around our islands by Caquetian scouts. Small companies at Amsterdam, Enkhuizen and Rotterdam organized illicit trade with their partners on the Iberian dominions across the Atlantic.

The role of Amsterdam’s Sephardic merchants in the westward expansion of commerce and trade across the vast ocean, offered an historical turning point for Holland as a world power, by connecting the Dutch capital to the growing network of emerging merchants of the “Portuguese Nation,” who were conducting trade from the Iberian Peninsula and its American colonies. Sephardic merchants played a significant role in sustaining trade with the main land America. For trade with Spanish colonies was interdicted to all foreigners.

1624 had been related in some documents, that there are cattle and Christianized Indians on the islands of Curacao Bonaire and Aruba. Aruba is a low country, but has two small mountains, called Yamanota and Pan de Azucar as called by the Spanish, the last presents itself to the eye in the shape of a sugar-loaf, our todays “Hooiberg” Haystack. A pyramid shaped hill about five miles in circumference and an elevation of 165 m. The island is inhabited by families of Amerindian Christians, mestizos and some Spaniards”. They sustained their selves as farmer, fishermen. They hunted and herd horses, mules, donkeys, cattle, goats and sheep. Nothing is heard yet about landings on Aruba, though its few inhabitants some years afterwards saw ships sporting the flag of the West India Company sailing past.

Aruba’s horsemen frighten the Dutch. In January 1627 a Dutch expedition commanded by Van Uytgeest was off St. Vincent, where they remained for some days. Next their course led them past Martinique, Santa Lucia, Dominica and St.Kitts and finally reaching Tortuga. Along the coast they cruised to Maracaibo and on May 1627 they arrived off Aruba, observing on shore many natives on horseback who did not look friendly, and did not think it advisable to disembark there. They sailed on to Rio Hacha, Colombia. Van Uytgeest, therefore, must have been close inshore, and the sight of those horsemen on Aruba must have been so disquieting that his people, who were not easily daunted, preferred the safety of their ships.

Between 1628 and 1630, some Dutch squadrons are noted sailing past in the Caribbean Sea steering for Bonaire. As a result Aruba was not the first of the three Leeward Islands to be called at by the Dutch, this was to be Bonaire in 1623. Of course there have been more ships around the islands under other flags. But not everything that happened was recorded.

In 1633 Spain conquers the island of St. Martin, a strategic point on the line connecting Brazil and New Netherland. They were in search of a suitable operational base in the struggle for supremacy in the New World. They are weighing the pros and cons of various islands. In this connection refer to the island of Aruba and its importance with regard to the route to Lake Maracaibo. But they don’t possess sufficient information concerning the South Caribbean. Until Jan Jansz Otsen, who had fallen into Spanish hands and thus seen something of Curacao, offers his services to the Dutch squadrons. Now! The Dutch decided to conquer these three “islands of Curacao” in the year 1634.

To get to know a little more regarding Aruba’s and its cultural origins we highly recommend Etnia Nativa`s cultural encounter session. A mind opening portal to an entertaining island experience. Mail us at etnianativa03@gmail.com our facilities and activities take place close to high rise hotels.