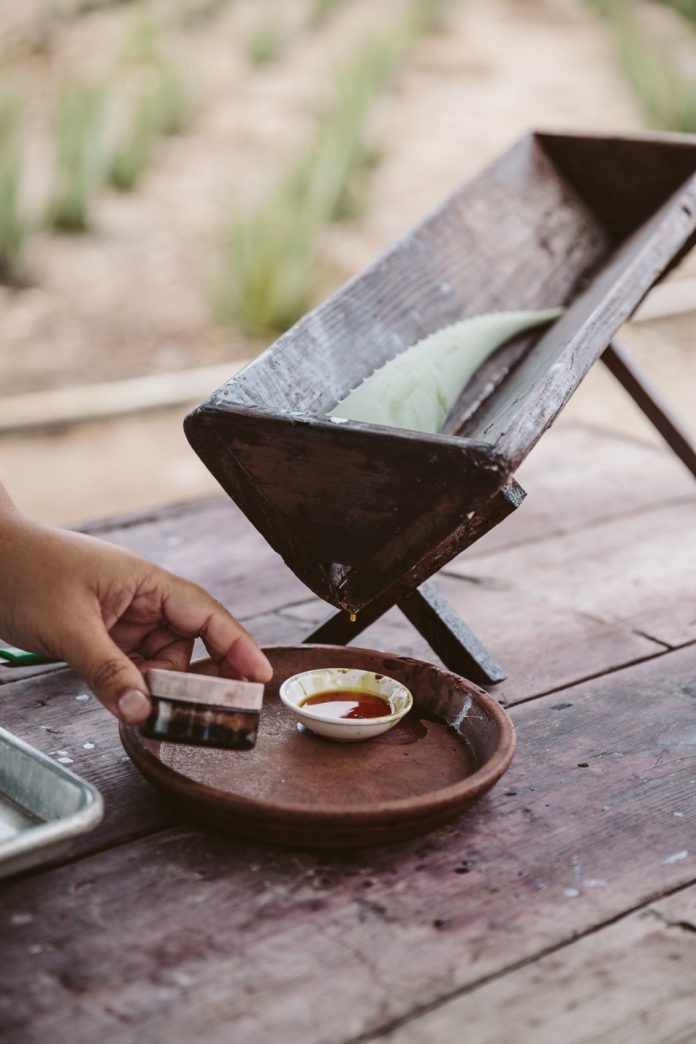 Aloe led a thriving existence on our island where it was introduced around 1840; limestone soil and dry weather were the best conditions for aloe to thrive. Of the 500+ species, only a few were used traditionally as herbal medicines, Aloe Vera being the most commonly used species. The Aruba aloe also known as ‘barbaloin’, has an aloin content of 22 percent bitter, yellow-brown colored compound noted in the exudate of at least 68 Aloe species, whereas the content of the aloe elsewhere in the world is supposed to average 15 percent at the highest.

From March to June the harvest is brought in, a very suitable time for Aruba since this is the dry season, during which in the seventeenth century and virtually till about 1928, there was little employment. The resin-sap, called ‘azeta’ in Papiamento, what stands for oil, was allowed to leak from the plants. The thick pulpy leaves sharply dentate at the edges were laid in drip-troughs, sloping gutters consisting of two boards. Payment for this heavy work was made by the gallon; hence deceit was sometimes practiced by thinning the sap. It was transported in small lidded casks, strapped on donkeys in pairs, to the boiling -pots, to be reduced by evaporation. This reducing of the sap to resin took place in open brass pots of about 200 liters content. The thick liquid was subsequently ladled into oil-boxes where it cooled off and coagulated into a mass which contracted to a considerable degree. Such a box contained 57.5 kilos of resin. Sometimes the resin was poured into calabashes, in which packing slightly higher prices could be made. Today modern aloe products are made locally. Mr. Laurens Oduber was once one of the main exporters of this coveted resin owning vast pieces of land surrounding Oranjestad. The aloe resin was sent abroad, most of it by far to New York, but also to Texas, Hamburg and London.

About 1890 prices began to fall and in 1900 no more than three dollar cents per pound could be obtained. Nevertheless during this period aloe-growing was continued on Aruba though it was impossible to make profits.

The better grades in particular went to London, realizing as much as 60 shillings per hundred pounds. In the London of before the First World War the aloe from all the three islands was priced a little higher than that from the Cape: 31 to 36 shillings for the island grades, 29 to 32 shillings for the Cape ones.

As a source of income at any rate the aloe was important enough for the parish-priest of Sabaneta to keep a field as 1916 “in favor of the Church”.

Like all other industries aloe-growing was affected by the coming of the oil-industry. Not until 1950 was aloe-planting on a large scale resumed.

In 1947 the Aruba aloe products company was inaugurated, meanwhile in the previous century the use of aloe was common among the inhabitants but without applying any previous process not until about 1890 did they begin to extract its aloin in order to work it up to laxatives, etc. Aruba always shipped plain aloe-juice, which had to be thinned elsewhere so as to obtain aloin. The Aruba Aloe Products Company now purchases this juice to work it up at factory in 1949. This aloin is shipped direct from Aruba to the United States, export to England.

Under the supervision of an expert, the American Irving D. Cantor, about six men are at work in this industry, whose foundation cost half a million guilders. It goes without saying that the factory only works full time in the period from July to January, but since already in March the first sap is bought, this newest industry on our island represents an important asset. However, the growth of the marketing of aloe was threatened by the rights of protection in other countries and by the circumstance that young people are not inclined to seek employment in it and prefer another type of work. In 1951 its production amounted to approximately 15,000 pounds, representing around 30 percent of world production. To get to know more about Aruba and its origins, its animals and culture, we highly recommend you to book your visit for our renowned cultural encounter session has been entertaining curious participants for decades. Mail us at etnianativa03@gmail.com to confirm your participation. Our facilities and activities take place close to high rise hotels.

Island Insight Episode XXVI: All for the red Aruban gold