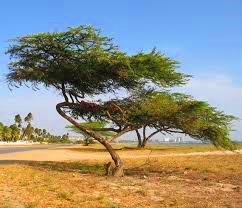 For Aruba Watapana was a means of living providing many with seasonal work. The plucking of the Watapana-pod and the cutting of the wood, it was very suitable for burning charcoal, were legally protected.

Possibly the Divi Divi is a native tree, but it may also have been imported and grown. At any rate we know that the Spaniards on Curacao tanned skins with the Divi Divi-pods. Pods contain tannic acid and gallic acid. The high tannin percentage of the ripe pods was known before 1840. Mostly the tree is recognizable at a considerable distance by its “wind form”. Not a single species of tree has a wind-form as typical as that of the Divi Divi.

The Watapana is a name used by the whites and natives to call this fascinating tree. The name Guatapana (Spanish spelling) is also used in certain regions of Cuba, Mexico, Puerto Rico and Central America.
Pods where called Divi Divi, under this name it was brought on the market in Caracas, to be shipped to Spain. Today the real local name is being replaced and forgotten.

The Watapana grows almost anywhere on the island and the dried leaves and humus accumulated beneath are much sought after for their soil enriching qualities. Not in the least this action meager the survival chances of the specimen. This tree was so important in the 19th century and up to 1920 that there was a severe penalty for those who cut a single tree. On lease grounds it was even worse. You needed a special permit by the Lt. Governor to cut one and you better have a very good reason to request such a permit. Twice and in good rainy years three times the tree will bear. The tree was cared for to be free from beetles and weevils, for these pests would ruin a harvest. The gathering of the pods was the job for women and children. The whole of Aruba awoke to fresh activity at harvest-time. Women and children went out with sticks and baskets or gabs to beat the pods off the trees and gather them. They were to hand in wat they had gathered to the owner each day, who paid them twenty-five Dutch cents for every bag containing slightly over 20 kilograms. The pods had to be examined in order to remove dirt and bits of stalk as well as unripe fruits, after this they were dried in the sun for a few days.

The people sometimes plucked unripe pods, such pods were put into the ground where, after some days, they assumed a dark color and looked something like ripe ones though they hardly contained any tannin. Half-ripe pods, pounded fine and boiled, yielded a pap sometimes used as a popular medicine to be applied to open sores of animals.

Aruba produced a considerable part of the total Watapana-crops. The principal market was Hamburg in Germany. Divi Divi was used at the tanneries on the Elbe River for the preparation of leather that was manufactured into the greased leather boots of East-European farmers. However, Aruba never shipped direct, everything went via Curacao. In Europe Divi Divi was much in demand and tannin at some places sold for sixty to eighty guilders a ton. One of the best years was 1911, when Aruba exported 303.000 kilos, Curacao 652.000 and Bonaire 1.102.000 kilos.

The Watapana meanwhile has become the official tree of Aruba and was so decreed by the Aruba Parliament. However many times the not enforced laws concerning protection and conservation of natural resources and other heritages, gives the false impression that we do not care to conserve. The economy that this tree once provided has fed many families. It is no coincidence that wherever you see aloes the Watapana is also seen. Both formed a means of income for the countryside during more than a century.

To get to know more about Aruba and its origins, its animals and culture, we highly recommend you to book your visit for our renowned cultural encounter session has been entertaining curious participants for decades.  Mail us at etnianativa03@gmail.com to confirm your participation. Our facilities and activities take place close to high rise hotels.q