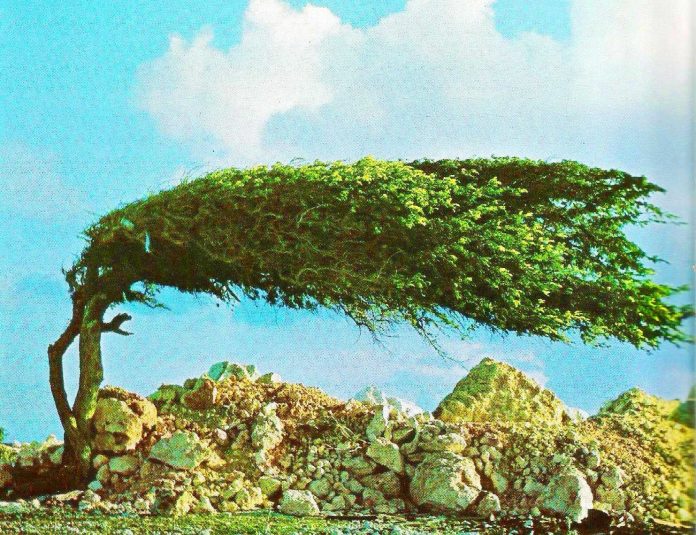 This famous tree was once the property of the then Dutch government. The Watapana-tree is officially called Caesalpinia Coriaria. Nowadays people erroneously call it Divi Divi. There are many types or species that people confuses or contains the name with the Watapana. Aruba has only two plants that use the name watapana: one is a big tree and the other one a brush or schrub called Watapana Shimaron Desmanthus virgatus, which means shy Watapana which also contained some tannin.

The watapana originally was called and still known as Guatapana in Cuba, Mexico, Puerto Rico and Central America. Pods contain tannic acid and gallic acid. Aruba’s Amerindians used to call the pods divi divi. Under this name it was brought on the market in Caracas, to be shipped to Spain and Germany. Today the real local name is being forgotten. 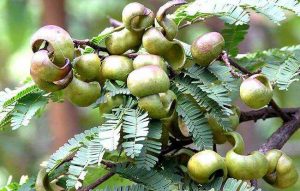 The Watapana grows almost anywhere on the island and the dried leaves are much sought after for enriching the soil. This tree was so important that in the 19th century onto 1920, that severe penalty was imposed on those who cut a single branch of tree. On lease grounds it was even worse. You needed a special permit by the Lt. Governor to cut one and you better have a very good reason to get such a permit. Twice and three times during a good rainy years seed pods could be collected to be sold and exported. The tree was cared for as to be free from beetles, weevils or termites, for these pests would ruin a harvest. The gathering of the pods (balina’s) was the job for women and children. The fruits had to be ripe for the best tannin quality concentration.

The Watapana meanwhile has become the official tree of Aruba and was so decreed by the Aruban Parliament. It is no coincidence that wherever you see aloes the watapana is also present. Both formed a means of income for the countryside population during more than a century. Aruba produced a considerable part of the total Watapana-crops export to Europe. The principal market was Hamburg in Germany. Divi Divi was used at the tanneries on the Elbe River for the preparation of leather that was manufactured into the greased leather boots of East-European farmers. However, Aruba never shipped direct, everything went via Curacao. In Europe Divi Divi was much in demand and tannin at some places sold for sixty to eighty guilders a ton . One of the best years was 1911, when Aruba exported 303.000 kilos, Curacao 652.000 and Bonaire 1.102.000 kilos.