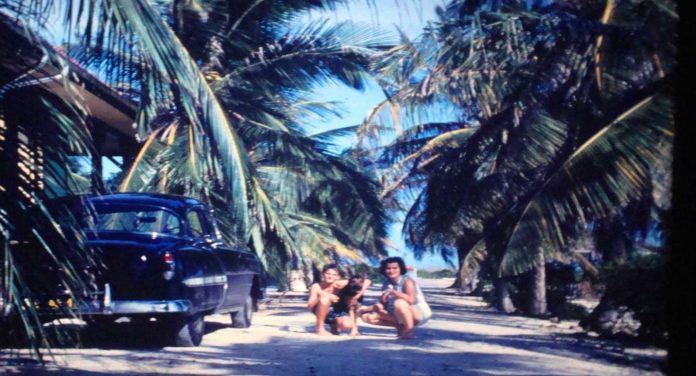 When Lago Aruba Refinery, one of the world largest oil refineries back then, went over to the automatization of their refining-industry, layoffs began to rain so fast that an unemployment problem arose on Aruba. In order to widen the basis of our economic existence, the administration took various projects in hand.

The first of these was a greater concentration on Caribbean tourism which had soared since 1950. Plans were made to attract cruise ships to the Paardenbaai (Horses’ Bay) in Oranjestad. The arrival of the first cruise ship of that time, The Trade Wind, calling port on February 1955, had become a historical event. Receptions and festivities had been organized. A welcome committee, consisting of Aruban girls dressed for the occasion in specially designed gowns, stood ready on the quay to guide the tourists to the Oranjestad shopping-center. Almost all cars on the island streamed to the harbor, traffic jams were caused, and one wondered whether the Aruban population were setting forth to see the tourists or whether the tourists were here to see the island.

The ‘Trade Wind’ started up a new era in the history of the island’s economy. Tourism dates back from the beginning of 1955. The Grace Line, whose freighters only used to call at our island before June 1956, since then has had their luxury liners head for Horses’ Bay. Other lines followed. During the cruising-season the biggest tourist vessels were mooring our harbor. In 1956 a total of 3002 foreigners visited Aruba and in 1960 the number had risen to 13,125. Night-stays at hotels in those three years increased from 31,936 to 94,607. The hotels naturally were not able to cope with this sudden increase. Seeing this, Ch.J. Neme, who had built the Strand Hotel before in February 1957, opened the Hotel Basi Ruti on Palm Beach.

The construction of the first high rise hotel, Aruba Caribbean Hotel and Casino, attracted the rich and famous. It was beneficial for our island seeing that there was a yearly-increasing wave of sight –seers in the Caribbean area due to this building. In this manner, it was hoped that a considerable source of income would be opened up. To finance the hotel the Aruven Company Inc. was founded, of which the island was the largest shareholder. In Venezuela the Venaruba Company Inc. was set up to collect funds. Other shareholders were banks, companies, and the business world.

On July 1958, this hotel, whose building-expenses amounted to 8 million Antillean guilders, was opened. Palm Beach, which until then could only be reached by secondary roads, was connected with town and airfield by a boulevard. This boulevard, which had a construction cost of 1 1/3 million Antillean guilders, to which another 175.000 guilders should be added for the cost of illumination, was opened on May 1st, 1958. The coastal area meant to be a tourist resort is now of easy access.

In 1961 the quaint restaurant De Olde Molen (The Old Mill) was established here. A mill was purchased in the Netherlands and carried across the ocean for this purpose. Stay pending for part II of ‘How tourism started on Aruba’ next week Tuesday.

To get to know more about Aruba and its origins, its animals and culture, we highly recommend you to book your visit for our renowned cultural encounter session has been entertaining curious participants for decades. Mail us at etnianativa03@gmail.com to confirm your participation. Our facilities and activities take place close to high rise hotels.