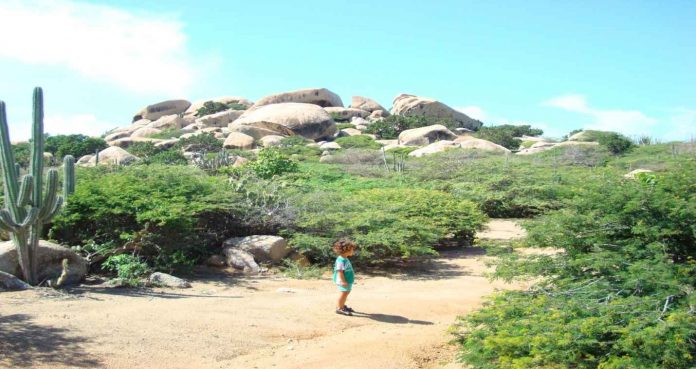 Although this famous succulent appears on our islands code of arms it is not really local specie. The unique vegetation of our island is part of the local culture and national identity, so in order to protect it we hope to allow future generations to enjoy the special environment it creates.

Thorny shrub, tree cactus, and agave varieties are abundant, though not in large numbers of species. The cactus grows in the wild. Its seeds are dispersed by the wind and fauna, especially birds and bats that delight with the delicious fruits it creates.

In this succulent vegetation we find the best known and most famous of all which is the aloe, although this famous succulent appears on our islands code of arms and is called the Aruba aloe, this plan reality is not an endemic or local specie but has adapted even better that in its place of origin some say. In reality this now famous succulent was introduced to Aruba to encourage its cultivation and create new sources of income for the islanders. Some varieties of aloe were imported from the island of Socotra and others from the island of Barbados around 1840 and had begun to generate great additional income for those who had decided to invest in it.

Nowadays the so called Aruba Aloe has become an important ingredient in many pharmaceutical and skin products used to protect against the harsh sun, in shampoo`s and to mitigate the negative effects of chemotherapeutic burns. It also can be found in laxatives, consumed to treat constipation and as a detoxification agent.

Aloe had a prosperous existence on our island. The limestone soil and dry climate were the best conditions for the aloe to thrive. For the more than 500 species, only a few were traditionally used as medicinal herbs, with Aloe barbadensis having yellow flowers being the most widely used followed by Aloe vera with light orange flowers.

Aruba`s aloe, also known as ‘barbaloin’, has an aloin content of 22 percent, a bitter yellowish-brown compound seen in the exudate of at least 68 species of aloe, while the content is assumed to of aloe in other parts of the world is 15 percent at the highest. Harvest used to be brought in from March to June, a very suitable time for Aruba since this is the dry season, during the time which in the seventeenth century and virtually till about 1928, there was little employment. To extract or resin-sap from aloe, is called ‘azeta’ meaning oil in Papiamento, the thick, pulpy leaves and serrated at the edges, were placed in an inclined drip channel box, consisting of two boards with long two legs and two shorter legs in the front. Payment for this heavy work was made by the gallon and was transported in small covered casks, tied on donkeys in pairs, to the boiling pots in order to be reduced by evaporation. This reduction of the sap to resin took place in open brass bowl of about 200 liters of content. Subsequently, the thick liquid was poured into boxes of where it cooled and coagulated into a mass that contracted to a considerable degree. Such a box contained 57.5 kilos of resin. Sometimes the resin was poured into tree calabas, Crecentia cujete which could be packaged at a slightly higher price. Today, modern aloe products are manufactured locally.

To get to know a little more regarding Aruba’s and its cultural origins, we highly recommend you to book your participation in our cultural encounter session. A mind opening revelation and entertaining island experience. Mail us at etnianativa03@gmail.com our facilities and activities take place close to high rise hotels.

A scientific journey across the island- Part II