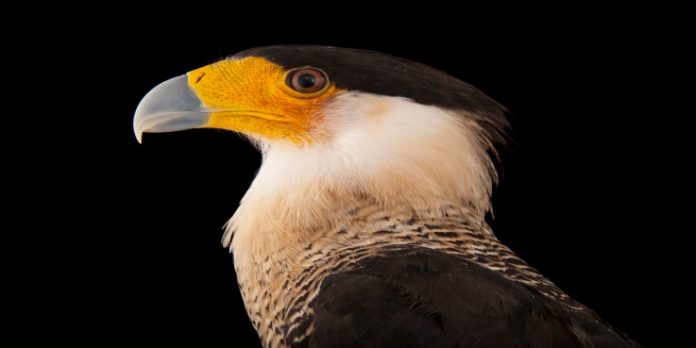 Loss of habitat:
Our beautiful Crested Caracaras are less frequently encountered today in Aruba. However they are still common in South America. We recommend avoiding areas where they breed since this can affect researchers’ ability to estimate population trends. Based upon Etnia Nativa’s research, findings revealed that population has dropped by 50% since 1985, which indicates protection must be considered or even to be listed as a species that is very much threatened. Wara-wara, as we called this magnificent bird in Papiamento, are resourceful animals that eat just about anything. In the following sequence of four pictures, we can observe a breba cactus disappearing which had a long standing nest in it, while one bird is jumping around in stress around what once used to be its nest, then stands on the pile of the bulldozed cactus, only to fly away and contemplate the ongoing destruction with the rest of its family that lost their home to development.

From the moment we decided to develop our home into a top tourist destination, island officials had solely focused on the revenue this could generate for the island, and the money they can earn without much consideration for our environment. This myopia has had devastating consequences that is blowing up in our face as we speak. We had to import thousands of workers that also only had the money they could send back home to their families in their country of origin in mind. Many, who have had no formal education, come to compete with locals and could be exploited in a way locals reject for themselves. This unfortunate situation brought the need for more housing, more infrastructure and supporting development, which had its toll on our lives and on our fragile ecosystem. This form of exploitation of our island, by turning a blind eye to the essence of what we have had to share with our visitors, sincere friendliness, pristine ecosystem and a yearlong sunny climate is in danger of disappearing forever. At this pace we are destroying our island’s ecosystem at an unprecedented rate in the name of progress and threatening the survival of all species that only live on Aruba. The evidence is irrefutable. The destruction of our biodiversity and ecosystem services has reached levels that threaten our well-being our product, as much as human-induced climate change on the “disputed or controversial global warming effect.”

With these words chair Robert Watson launched a meeting in Paris to agree the final text of a major U.N. report on the state of nature around the world – the biggest and most thorough assessment to date, put together by 150 scientists from 50 countries.

Around 700 vertebrates have gone extinct in the past few centuries. Forty per cent of amphibians and a third of coral species, sharks and marine mammals look to follow. The main reason is simple: Our expanding neighborhoods and the number of hotels are leaving less space for wildlife. The other major causes are the direct exploitation of wildlife by bulldozing everything to the ground, climate change, pollution and the spread of invasive species and burning down the Amazon is set to become ever more destructive.

In this episode I would like to dedicate a few words to a very special scavenger, a bird whose main job is to keep the island clean of dead carcasses which can spread disease. Our wara-wara or crested caracara is a bird of prey in the family Falconidae. It was formerly considered conspecific with the southern caracara and the extinct Guadalupe caracara as the “crested caracara”. Pic. 7. Awareness art projectregarding loss of habitat and ecocide on the island. Pic.8. Art project to bring awareness to the general public regarding the importance of our breba Pic.9..Etnia Nativa’s Curator giving an explanation to the Queen of Holland of the communal project during one of her official visits to the island.

The name “caracara” is said to be of Caquetio Indian origin, Guara-wara derived from the unusual rattling vocalization that the bird utters when agitated.

The crested caracara is a bird of open habitats, typically grassland, prairie, pastures, or desert with scattered taller trees, shrubs, or mature candelabra cactus in which it nests.

Adult pairs are generally monogamous, highly territorial and exhibit strong site fidelity. The young remain with their parents for several months after fledging, and at some sites two broods are raised per year. Non-breeding caracaras are consistently gregarious and nomadic, often congregating in groups and roosting communally. They wade in shallow waters to grab fish, dig up turtle eggs with their feet, and turn over debris with feet to uncover insects or dead animals, specially goats and road kill. Their nesting period ranges between 42 to 56 days with clutches of 1 to 4 eggs.

Although populations on the island have received some recent attention by our curator at Etnia Nativa, the crested caracara is relatively un-studied throughout its range. Rapid urban development in and around the district of Noord has resulted in loss of many nesting habitats, and in 2004 this population was classified as threatened by Etnia Nativa studies, limiting expansion of the tourist industry, land-clearing, and habitat conversion could be beneficial to the species. In some regions, direct human persecution continues, primarily by bull dozing mature candelabra cactus like the cadushi, Stenocereusgriseus and the breba, Cereus repandus, shooting and even poisoning, mostly because of negative attitudes of non-islanders towards scavengers.

Discover an Aruba which no other could share with you. Discover and explore and take your experience home with you. Our renowned indigenous and educative session has been entertaining curious participants for decades. Mail us at etnianativa03@gmail.comto confirm your participation. Our facilities and activities takes place close to yourhotels area.