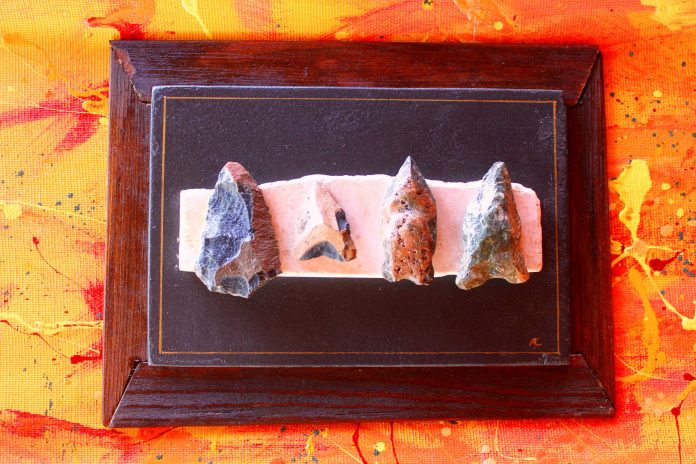 Our island experiences as never before an enormous challenges in keeping its cultural authenticity intact in fighting back neoliberal progressive incursions when it comes to the protection its historical architecture, archaeological sites and objects of tangible and intangible cultural heritage significance.

We at Etnia Nativa exclaim for conscious consideration and share awareness by showing its archaeological salvage collection of past destructions that otherwise have been lost forever. Objects belonging to different time periods of our island`s prehistorical heritage, Paleolithic as well as the Neolithic era. There are great differences between one another. Nomadic Paleolithic trafficking between islands and the mail land, who survived on hunting and gathering, while the Neolithic community that followed consisted also of sea going tribes , but dominating the art of ceramics while being an agro- sedentary society. The material legacy of our Paleolithic societies includes human as well as animal boney materials, ivory, horns, works in stone, shells and possibly rock art. It is indicative that family groups where organized in matriarchal clans, sustaining themselves by hunting, fishing and gathering of fruits and shell fish. They followed the stars and where engaged in cultural artistic ceremonial activities.

When we talk about Paleo lithic people visited Aruba we should consider to imagine a time when hunting mega fauna was a way of life on main land South America todays Venezuela, going back atleast 30.000 Yrs. People that came from the North crossing Meso American and island hopping to reach here. The Neolithic or the New Stone era, was a term coined by J. Lubbock in 1865 to refer to the cultural stage that developed from around 10,000 BCE until 3,000 BCE. There is no doubt that the Neolithic was and is one of the most decisive stages in our long history.

The sedentary society of the Neolithic period builded neibourhoods using branches and straw to cover the roofs of houses by placing a layer of mud on top of the straw to give it more consistency against the elements .Walls of dwelling used mud, straw and tree trunks. Also during the Neolithic period, they continued to make stone instruments and tools, but these where smoothly polished. As raw materials, flint and quartzite known as chert and granite will be used, and two new materials will appear: diabas and basalt.

The Neolithic period implied a gradual not sudden cultural change, it’s divided into stages according to the level of sophistication achieved in agriculture, architecture and ceramics.

To get to know more over Aruba’s and its origins, its animals and culture, we highly recommend you to book your visit for our renowned cultural encounter session has been entertaining curious participants for decades. Mail us at etnianativa03@gmail.com or WhatsApp +297 592-2702 to confirm your participation. Our facilities and activities take place close to high rise hotels.