Our main objective is to educate the readers in Aruba’s heritage since when you love and value what you have, ones greatest desire is to protect it. In this episode you will know who is an Aruban native.

Aruba has a native ethnic heritage, ethnicity refering to the identity of a group of people linked by a long common past. Members of an ethnic group often share a common ancestry, history, and language. The autochthonous Aruban root comes from the Caquetia ethnic group that inhabited northwestern South America, extending along Lake Maracaibo and were farmers from the tropical forests of the continent who came by sea to conquer the islands of Bonaire, Curaçao and Aruba.

Like all aboriginal people, the knowledge of the Caquetio people arose from close contact with nature, from their need to dominate it and to seek solutions to their problems using biodiversity in it. These people shared cultural identity and creativity from the raw materials available, taking into account the desire to improve both at a community and personal level. Eventhough Aruba was not welkoming european setlers, a steady mestization took place under the natives first the Castillian followed by the Dutch, Jews, Brithish and other western Europeans. You can say that an Aruban is made out of 4% Afro 16% Western European and 80% Native Amerindian.

To this day we see the reflection of that local Amerindian cuultural heritage that has been passed from generation to generation such as making sea going vessels, fishing practises, holding plantations and animal husbandry in thier “cunucus”. For our ancestors, corn was a vitally important crop, followed by cassava, beans, pumpkins, and peanuts. But corn was already considered sacred for the Caquetio who respected this plant as mother food. A testimony to this sacred cultivation are the milling stones called qudi or metate that was used to grind corn and to this day forms part of the garden of many Aruban homes. 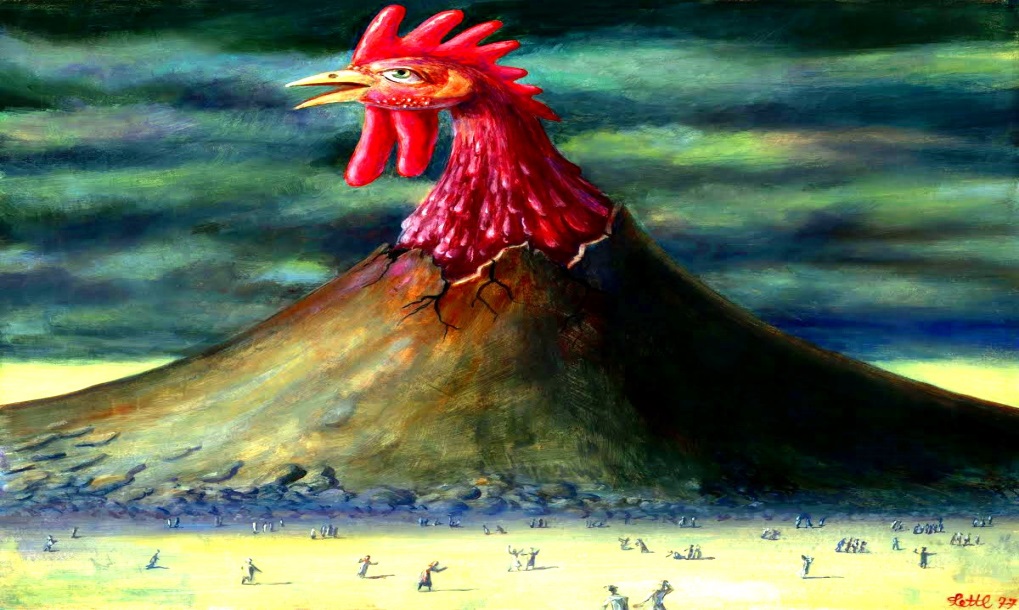 Also our ancestors were educated with the belief that the natural resources of the earth should be used with respect and that, if possible, something should be given in exchange in gratutude. That is why in a few more days the island will be illuminated by different bonfires from in raletion to the ceremony of “Dera Gay”

Dera Gai _meaning “burying the rooster” an anual harvest festival whose beginning dates back before to colonial times and to this day the traditional dances and songs are maintained. The symbol of the rooster and the bright red and yellow costumes are the centerpiece of the events that take place in various places, such as the neighborhood centers. During the celebration of “Dera Gai” there was a ritual where a live rooster was buried up to the neck and decapitated with a stick and covvered eyes, considering that the drained blood would make the land fertile for the coming harvest season. Today the roosters are no longer beheaded, however blindfolded participants one by one must find a flag nailed to the ground or a real stuffed rooster while mouving the stick to the ritim of the music of a band.

Also on the eve of this holiday, bonfires are lit where the remains of the previous year’s harvest are burned in preparation for the new growing season, so prepare to see bonfires all over the Aruban countryside and as usual some fire trucks run up and down to tame fires that got out of hand in the strong wind.

If you love Aruba its origins and its cultural heritage, be part of the exclusive visitors of Etnia Nativa it’s a private residential houses collections of native art, archaeological artifacts and historic furniture, while the facilities themselves are the result of the transformation of recycled materials. Meet Anthony Croes, our columnist at his museum/ home! Book your visit Whatsapp + 297 592 2702- or mail: etnianativa03@gmail.com